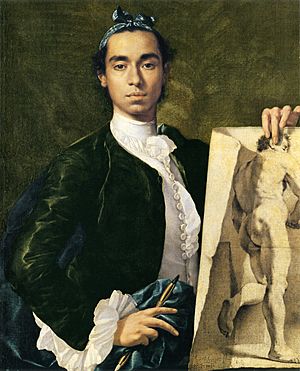 Luis Egidio Meléndez (Naples, 1716-Madrid, 1780) was a Spanish painter. Although he received little acclaim or praise during his lifetime and died in poverty, Meléndez is recognized today as the greatest Spanish still life painter of the eighteenth century. His mastery of composition and light, and his remarkable ability to convey the volume and texture of individual objects enabled him to transform the most mundane (ordinary) of kitchen fare into powerful images.

All content from Kiddle encyclopedia articles (including the article images and facts) can be freely used under Attribution-ShareAlike license, unless stated otherwise. Cite this article:
Luis Egidio Meléndez Facts for Kids. Kiddle Encyclopedia.