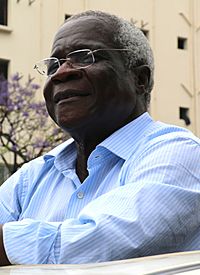 Afonso Marceta Macacho Dhlakama (1 January 1953 – 3 May 2018) was a Mozambican politician. He was the leader of RENAMO, an anti-communist guerrilla movement from 1979 to 2018. He fought the FRELIMO government in the Mozambican Civil War before signing a peace agreement. Dhlakama became the opposition leader in the early 1990s. Dhlakama was born in Muxúngue, Sofala Province.

All content from Kiddle encyclopedia articles (including the article images and facts) can be freely used under Attribution-ShareAlike license, unless stated otherwise. Cite this article:
Afonso Dhlakama Facts for Kids. Kiddle Encyclopedia.