Emblem of the Afrikaner Weerstandsbeweging 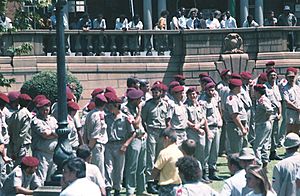 The Afrikaner Weerstandsbeweging (AWB) is a South African political party for the white Afrikaner people, the Boers. It was formed in 1973 by Eugène Terre'Blanche. He led the party until his death in 2010. It is now led by Steyn van Ronge.

They are a party for the white South Africans who want their own nation. They want to name it Boerestaat. The party is not as extreme as other parties who want to kick out all the black South Africans. The AWB simply wants a state within SA borders.

The AWB also wants to go back to apartheid, or at least some of them want it. And they want to end the killing of white people by black people. The organisation is not violent, but it used to be back in the 1990s.

All content from Kiddle encyclopedia articles (including the article images and facts) can be freely used under Attribution-ShareAlike license, unless stated otherwise. Cite this article:
Afrikaner Weerstandsbeweging Facts for Kids. Kiddle Encyclopedia.