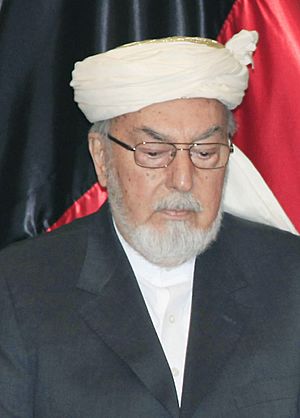 Sayyid Ahmed Gailani (Persian: پیر سید احمد گیلانی‎; 1932 – 20 January 2017) was an Afghan Islamic leader and politician. He was the leader (Pir) of the Qadiriyya Sufi order in Afghanistah. He was also the founder of the National Islamic Front of Afghanistan. The party was tied with the Mujahideen who led the war against the Soviet Union in the 1980s. He also founded the High Peace Council in 2001. He was born in Surkh-Rōd District, Nangarhar Province.

All content from Kiddle encyclopedia articles (including the article images and facts) can be freely used under Attribution-ShareAlike license, unless stated otherwise. Cite this article:
Ahmed Gailani Facts for Kids. Kiddle Encyclopedia.