In this Korean name, the family name is Ahn. 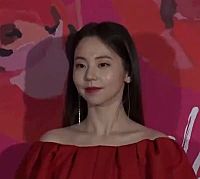 Ahn So-hee (born June 27, 1992), better known by the mononym Sohee, is a South Korean actress and singer. She is a former member of the South Korean girl group Wonder Girls. She was born in Seoul, South Korea. She is known for her roles in Train to Busan (2016) and Single Rider (2017).

All content from Kiddle encyclopedia articles (including the article images and facts) can be freely used under Attribution-ShareAlike license, unless stated otherwise. Cite this article:
Ahn So-hee Facts for Kids. Kiddle Encyclopedia.