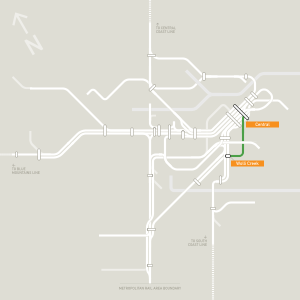 The Airport Link (also known as the Airport Line or New Southern Railway) is a railway line in Australia connecting Sydney Airport to the Central Business District and the south-western suburbs of Sydney. With the exception of Wolli Creek, the Airport Line stations are operated by a private company, the Airport Link Company, as part of a public private partnership. The contract allows the company to charge a surcharge on top of the normal fare. The line is served by Sydney Trains T8 Airport & South line services.

For most of its length, the line travels underground. It runs south from platform 23 at Central station across a viaduct to the tunnel portal beneath Prince Alfred Park near Chalmers Street. The tunnel roughly follows George Street underneath the suburbs of Redfern and Waterloo. At Green Square station, beneath the intersection of Botany Road, Bourke Road and O'Riordan Street, the line continues beneath Bourke Road to Mascot station, a block south of Gardeners Road.

From Mascot, the line roughly follows O'Riordan Street before turning sharply to the west once underneath Sydney Airport. The line runs westward under the Domestic and International terminals before continuing north-west underneath the Cooks River to reach the surface at Wolli Creek where it joins the East Hills line. The line is two tracks for its entire length.

The two new stations which were built for the airport's International and Domestic Terminals, feature larger lifts and wider ticket barriers to cater for passengers with baggage. Three new suburban stations were built – one each for the residential development areas of Mascot and Green Square, and an interchange station with the Illawarra line at Wolli Creek.

In 1990, the State Government called for Expressions of Interest to build a line to the airport. In July 1994, the Government announced it had entered a public private partnership with Transfield Services and Bouygues to build the line. Under the deal, a private company, Airport Link Company, would cover the costs of building four of the stations. In return they would operate those stations for 30 years and have the right to impose a surcharge on fares for their use. The company's involvement was predicated on passenger estimates and train reliability guarantees that later proved to be optimistic. The State Government would fund (and own) the railway itself and Wolli Creek station.

Construction began on 12 February 1995 with a view to improving facilities for air travellers ahead of the 2000 Summer Olympics. At the time, the main public transport link between the city and its airport were two Sydney Buses express routes, the 300 to Circular Quay and 350 to Kings Cross branded as Airport Express.

A Tunnel boring machine was used for the construction. Manufactured by the German firm, Herrenknecht, it arrived in Australia in October 1996. While the use of a Tunnel boring machine relieved the need for large numbers of workers at increased pressure, a caisson system is formed at the cutting head. Workers entering this space for inspection, maintenance and repair had to be trained. Medical direction was utilised for planning compression and decompression, assessment of fitness to dive, training of workers and lock operators, health monitoring of workers and treatment of related injuries. This project was the first time oxygen decompression tables were used for caisson work in Australia. The incidence of decompression illness was 1 case in every 286 pressurisations (0.35%) and this problem affected 5.9% of the workers.

The line opened on 21 May 2000, three months ahead of the Olympic Games, after the State Government had spent around A$700 million on the project and the Airport Link Company over A$200 million. In conjunction with the construction of the new line, the section of the East Hills Line between Wolli Creek Junction and Kingsgrove was quadruplified. Once this was opened, the running patterns of the trains on the lines changed. The flying junctions interchange near Central station was altered to give the Airport line its own platforms (21 & 23) at Central. Local (all stations) trains generally were timetabled to run from East Hills via the airport, peak hour express trains from Campbelltown run along the original route via Sydenham, taking the express tracks between Kingsgrove and Wolli Creek Junction. 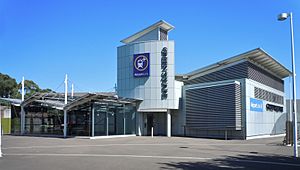 From the beginning, a major criticism of the line was that it is not served by dedicated rolling stock, as has occurred elsewhere such as in the Hong Kong MTR's dedicated Airport Express line. Travellers entering the line at Domestic and International must compete for space with commuters from the East Hills line, and find that the trains have no special provision for their luggage. Services are provided by Sydney Trains's S, K, C, M and A set fleets.

Despite the cancellation of the rival Airport Express bus service, taxi surcharges and expensive airport parking, the Airport Link consistently failed to meet patronage targets. Less than a year after the line opened, the State Rail Authority stated that "patronage has been lower than expected to date", but they remained optimistic, believing "that as airport users become more familiar with this facility and the ingrained habits of many years gradually alter, patronage will continue to increase." In 2000, the Airport Link Company went into receivership, exposing the government to costs of around A$800 million. It was put up for sale in early 2006. State Rail blamed "lower than expected patronage" and stated it was working with the company to increase it.

In October 2005, the Government and the company signed a revised agreement on revenue and patronage, settling the latter's claims against the former. The Government paid A$34 million to the company, with another A$73 million due as CityRail earns revenue from Airport Line business.

Together with the Cross City Tunnel, the Airport Link served to dampen government and business enthusiasm for further public private partnerships in transport in New South Wales.

As the stations commenced operation on 21 May 2000, the ownership of the four stations reverts to the state government on 21 May 2030.

In March 2011, it was announced that the State Government would cover the cost of the station access fee at Green Square and Mascot stations, meaning that passengers no longer need to pay a surcharge to access these stations. To compensate Airport Link Company, the Government now pays the company a "shadow" station usage fee at a fixed contracted rate of approximately A$2.08 per entry and exit of these stations. A fee remains in place for Domestic and International stations. Patronage on the link had been growing at 20% per year, but between March and June 2011 patronage increased by 70 percent as a result of the reduced fares.

Although often perceived as all going to the Airport Link Company, under the revenue sharing agreement, from August 2014 85 percent of revenues raised by the access fee go to the State Government.

All content from Kiddle encyclopedia articles (including the article images and facts) can be freely used under Attribution-ShareAlike license, unless stated otherwise. Cite this article:
Airport Link, Sydney Facts for Kids. Kiddle Encyclopedia.