Ajkaceratops (pronounced "oi-ka-se-ra-tops") is a genus of ceratopsian dinosaur described in 2010. It lived in the Cretaceous period in what is now Europe, in what was back then the Tethyan archipelago. It is a ceratopsian, and is beaked. Ceratops means "horned face" in Greek.

The generic name, Ajkaceratops, honors Ajka, a town in Hungary where the fossils where found. 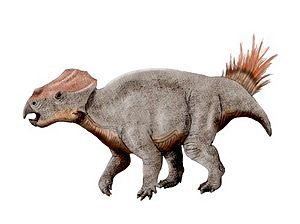 The Ajkaceratops has a skull that looks a lot like a Protoceratops skull, except that it has a hump near the beak. The body is slender and long, compared to the skull. The tail is very short for its size.

All content from Kiddle encyclopedia articles (including the article images and facts) can be freely used under Attribution-ShareAlike license, unless stated otherwise. Cite this article:
Ajkaceratops Facts for Kids. Kiddle Encyclopedia.