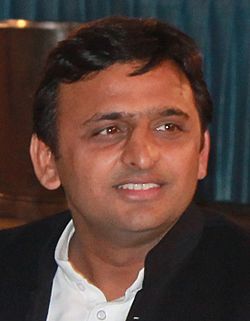 Yadav first was elected to the 16th Lok Sabha from the Kannauj constituency in the year 2000. On 10 March 2012, he was appointed as the leader of Samajwadi Party in Uttar Pradesh. He became the youngest Chief Minister of Uttar Pradesh in 15 March 2012.

All content from Kiddle encyclopedia articles (including the article images and facts) can be freely used under Attribution-ShareAlike license, unless stated otherwise. Cite this article:
Akhilesh Yadav Facts for Kids. Kiddle Encyclopedia.