The Al-Rahma Mosque (Arabic: مسجد الرحمة‎code: ar is deprecated ) is a mosque located on Hatherley Street in Toxteth, Liverpool, England, which can accommodate between 2,000 and 2,500 people and serves as the main place of worship and focus point for Liverpool's Muslim population, estimated at 25,000 people.

The first ever mosque in England was built in Liverpool; it was opened at 8 Brougham Terrace by a solicitor and Muslim convert William Abdullah Quilliam on 25 December 1889 and the mosque he constructed was maintained until 1908. That mosque was refurbished by the local community beginning in 2010 and is now occupied by the Liverpool Muslim Society. 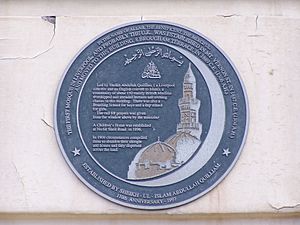 Plaque installed on the 110th anniversary of the mosque.

The current building is used primarily by the city's Arab and Somali populations whom constitute the vast majority of Liverpool's Muslim population.

All content from Kiddle encyclopedia articles (including the article images and facts) can be freely used under Attribution-ShareAlike license, unless stated otherwise. Cite this article:
Al-Rahma Mosque, Liverpool Facts for Kids. Kiddle Encyclopedia.