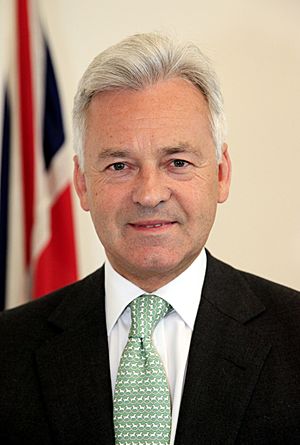 Alan James Carter Duncan (born 31 March 1957) is an English politician and a former Minister of State in the Department for International Development. He was born in Rickmansworth, Hertfordshire.

He is the Member of Parliament for the Rutland and Melton constituency in the United Kingdom. He was first elected in the 1992 general election.

He is openly gay and in a civil partnership with James Dunseath.

All content from Kiddle encyclopedia articles (including the article images and facts) can be freely used under Attribution-ShareAlike license, unless stated otherwise. Cite this article:
Alan Duncan Facts for Kids. Kiddle Encyclopedia.