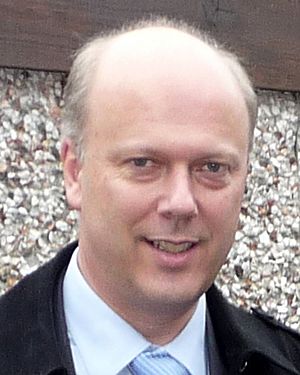 Christopher Stephen Grayling (born 1 April 1962) is an English politician and former Secretary of State for Transportation. He is the Member of Parliament for the Epsom and Ewell constituency in the United Kingdom. He was first elected in the 2001 general election.

He was appointed as a Privy Counsellor on 9 June 2010.

All content from Kiddle encyclopedia articles (including the article images and facts) can be freely used under Attribution-ShareAlike license, unless stated otherwise. Cite this article:
Chris Grayling Facts for Kids. Kiddle Encyclopedia.