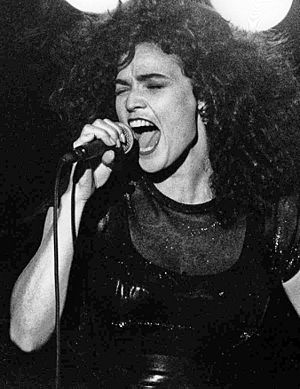 Alannah Myles (b. December 25, 1958, Toronto) is a Canadian singer, songwriter and producer. She began her career as an actress. Myles began singing professionally around 1979 but was rejected by all record labels in Canada. After recording 3 masters and a video of "Just One Kiss" with Christopher Ward and David Tyson for her first album, she was immediately signed to an 8 album international contract by the head of A&R, Tunc Erim. Her first album was released on April 6, 1989. The first two singles released at the same time in Canada. They were "Love Is" and "Black Velvet". "Love is was released in the mainly English speaking west. It went to #1. "Black Velvet" was released in Quebec and went to #1 on French Canadian radio. "Black Velvet" was released internationally in 1990. It reached number one in many places. It stayed at #1 for two weeks in the United Kingdom. "Black Velvet" was a hit song released in the United States on Jan 9, 1990 as a single. This made Myles eligible for a Grammy Award. She won the award in 1991 for "Best Rock Vocal Performance-Female".

All content from Kiddle encyclopedia articles (including the article images and facts) can be freely used under Attribution-ShareAlike license, unless stated otherwise. Cite this article:
Alannah Myles Facts for Kids. Kiddle Encyclopedia.