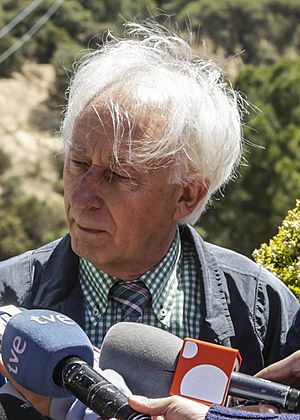 Albert Boadella Oncins (born 30 July 1943) is a Spanish actor and playwright. He was the director of the company of the independent theater Els Joglars until 2012. Boadella was born in Barcelona.

In 2003 he wrote the screenplay and directed the movie Buen viaje, excelencia, a caricature of the last months of life of the general Franco.

In December 2012 he was awarded the Alfonso Ussía awards in the category of Person of the Year, together with Arturo Fernández.

All content from Kiddle encyclopedia articles (including the article images and facts) can be freely used under Attribution-ShareAlike license, unless stated otherwise. Cite this article:
Albert Boadella Facts for Kids. Kiddle Encyclopedia.