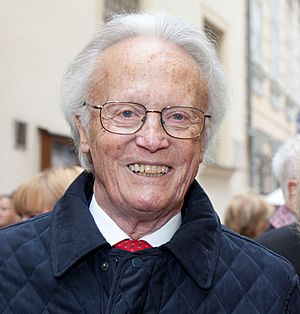 Albert Rohan (9 May 1936 – 4 June 2019) was an Austrian diplomat. He was Permanent Secretary of the Austrian Foreign Ministry from 1996 to 2001. Rohan was born in Melk, Lower Austria. From 1977 to 1981, he was Director at the Executive Office of the United Nations Secretary General.

All content from Kiddle encyclopedia articles (including the article images and facts) can be freely used under Attribution-ShareAlike license, unless stated otherwise. Cite this article:
Albert Rohan Facts for Kids. Kiddle Encyclopedia.