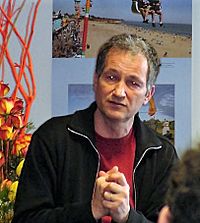 Aleš Debeljak (25 December 1961 – 28 January 2016) was a Slovenian cultural critic, poet, and essayist. He was born in Ljubljana, Slovenia, Yugoslavia. From the mid-1980s onwards, Debeljak took an active part in civil society movements. He was one of the co-editors of popular journal Nova revija.

All content from Kiddle encyclopedia articles (including the article images and facts) can be freely used under Attribution-ShareAlike license, unless stated otherwise. Cite this article:
Aleš Debeljak Facts for Kids. Kiddle Encyclopedia.