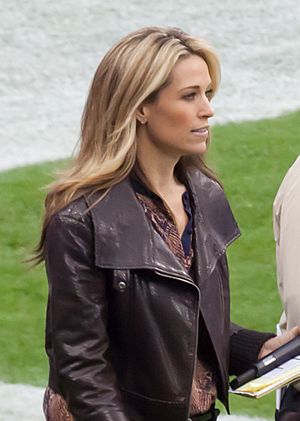 Alex Flanagan (born October 23, 1973) is an American sportscaster. She works for NBC and NFLNetwork. Flanagan has also worked for ESPN and Fox Sports Net. Flanagan is the host of NFL Total Access and does sideline reporting for Thursday Night Football and Notre Dame football on NBC. She also does reporting for some golf tournaments for NBC, the Olympic Games, and Football Night in America. She has covered NFL playoffs with Tom Hammond and Mike Mayock since 2010. She also reported on FSN programs such as Going Deep and The National Sports Report. During her time at ESPN, she reported for SportsCenter. She was on the field reporting for ESPN's coverage of college football, college basketball, tennis, and the College World Series. She was the host of the Home Depot College Football Awards.

All content from Kiddle encyclopedia articles (including the article images and facts) can be freely used under Attribution-ShareAlike license, unless stated otherwise. Cite this article:
Alex Flanagan Facts for Kids. Kiddle Encyclopedia.