Alexander B. Morrison facts for kids 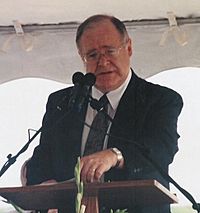 Alexander Baillie Morrison (22 December 1930 – 12 February 2018) was a Canadian-born American scientist, academic, and public servant. He was a general authority of The Church of Jesus Christ of Latter-day Saints (LDS Church) from 1987 until his death. He was born in Edmonton, Alberta.

All content from Kiddle encyclopedia articles (including the article images and facts) can be freely used under Attribution-ShareAlike license, unless stated otherwise. Cite this article:
Alexander B. Morrison Facts for Kids. Kiddle Encyclopedia.