Gordon B. Hinckley facts for kids 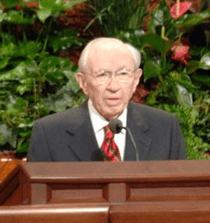 Gordon Bitner Hinckley (June 23, 1910 – January 27, 2008) was an American religious leader and author. He was the 15th President of The Church of Jesus Christ of Latter-day Saints (LDS Church) from March 12, 1995 until his death. Considered a prophet, seer, and revelator by church members. Hinckley was the oldest person to preside over the church in its history.

All content from Kiddle encyclopedia articles (including the article images and facts) can be freely used under Attribution-ShareAlike license, unless stated otherwise. Cite this article:
Gordon B. Hinckley Facts for Kids. Kiddle Encyclopedia.