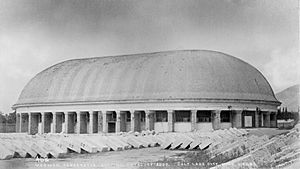 The Salt Lake Tabernacle, taken in the 1870s as part of a series of photos for the Denver & Rio Grande Railroad (established in 1870), showing granite blocks for the construction of the Salt Lake Temple (completed in 1893).

The Tabernacle is the home of the world-renowned Tabernacle Choir at Temple Square, and was the previous home of the Utah Symphony Orchestra until the construction of Abravanel Hall. It is the historic broadcasting home for the radio and television program known as Music and the Spoken Word. In 2005, the Tabernacle was closed for two years of intensive renovations that greatly increased its ability to withstand earthquakes. It was reopened and rededicated by Hinckley during the Saturday afternoon session of the church's general conference on March 31, 2007. The Museum of Church History and Art opened an extensive display on the Tabernacle as part of the rededication of the historic edifice.

All content from Kiddle encyclopedia articles (including the article images and facts) can be freely used under Attribution-ShareAlike license, unless stated otherwise. Cite this article:
Salt Lake Tabernacle Facts for Kids. Kiddle Encyclopedia.