Although a part of the Ogden-Clearfield Metropolitan Statistical Area, it serves as a bedroom community to Salt Lake City and the surrounding area. However, due to the very narrow entrance into Salt Lake County, roads between the counties often reach near-gridlock traffic during rush hour. The FrontRunner commuter rail has been running since April 2008, and the Legacy Parkway was opened on September 13, 2008. These were built to help alleviate the traffic load on Interstate 15 through the Bountiful area. 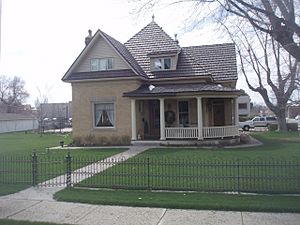 A home in Bountiful's Historic District.

Bountiful was settled on September 27, 1847, by Perrigrine Sessions and his family. It was Utah's second settlement after Salt Lake City. It was known as both Sessions Settlement and North Canyon Ward before being named Bountiful in 1855. This city was so named both because of the city's reputation as a garden place and because "Bountiful" is the name of a city in the Book of Mormon (Alma 52:9). Most of the settlers, and also most of the present inhabitants, are members of The Church of Jesus Christ of Latter-day Saints (LDS). The Bountiful Utah Temple was dedicated in 1995 by the LDS Church. A tabernacle of The Church of Jesus Christ of Latter-day Saints is also located in Bountiful.

The city was incorporated in 1892 with Joseph L Holbrook as mayor.

In 1907 electric lights came to Bountiful through the efforts of its citizens.

The city maintains a charming Main Street, with several locally owned shops, and is home to several big-box retailers.

The city celebrates its history at the annual Handcart Days celebration every July in conjunction with U.S. State of Utah’s official holiday, Pioneer Day. Bountiful Handcart Days is a volunteer–driven event. People from three cities in the south of Davis County, Utah come together to commemorate the first group of Mormon Pioneers’ entry into the Salt Lake Valley on July 24, 1847. The festivities include a parade, fireworks, games, entertainment, an art exhibit, and food.

According to the United States Census Bureau, the city has a total area of 13.5 square miles (34.9 km²), all of it land.

The original portion of the city and downtown are located at the base of the Wasatch Range, which rises high to the east, overlooking the city. Most of the residential neighborhoods climb high up the slopes of the mountain. To the west lies a flatland that extends to the Great Salt Lake and the mudflats and marshes that border it. Areas of Bountiful include Val Verda in the southern part of the city.

The cities surrounding Bountiful include: North Salt Lake to the south, Woods Cross and West Bountiful to the west, and Centerville to the north. Most land to the east of Bountiful is U.S. Forest Service property.

This climatic region is typified by large seasonal temperature differences, with warm to hot (and often humid) summers and cold (sometimes severely cold) winters. According to the Köppen Climate Classification system, Bountiful has a humid continental climate, abbreviated "Dfb" on climate maps.

All content from Kiddle encyclopedia articles (including the article images and facts) can be freely used under Attribution-ShareAlike license, unless stated otherwise. Cite this article:
Bountiful, Utah Facts for Kids. Kiddle Encyclopedia.