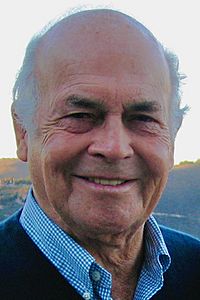 Alexander Dawson Henderson III (March 26, 1924 – May 12, 2020), was an American Army Air Forces personnel and businessman. He was born in New York City. He was married to Patricia Ford Crass.

He was stationed with the 52d Bombardment Squadron, one of the original squadrons of the 29th Bombardment Group. He was in a cadet program for flyers at Lafayette College in Easton, Pennsylvania. He was stationed in Cuba, Jamaica, Puerto Rico, and Guam.

Henderson was discharged from military service by honorable discharge on March 8, 1946 at Fort Dix, New Jersey.

Henderson created the Gold Coast Finance Company to provide consumer loans. He sold this company in 1967.

Henderson died at his home in Carmel Valley Village, California on May 12, 2020 at the age of 96.

All content from Kiddle encyclopedia articles (including the article images and facts) can be freely used under Attribution-ShareAlike license, unless stated otherwise. Cite this article:
Alexander D. Henderson III Facts for Kids. Kiddle Encyclopedia.