Alexander Valeryevich Semin (Russian: Александр Валерьевич Сёмин born 3 March 1984) is a Russian professional ice hockey winger who is currently an unrestricted free agent. He most recently played with HC Vityaz of the Kontinental Hockey League (KHL), the highest league in Russia. He has previously played in the National Hockey League (NHL) for the Washington Capitals, Carolina Hurricanes and Montreal Canadiens.

Semin was trained in the Traktor Chelyabinsk hockey school and made his professional debut in Russia's second-tier Russian Major League in 2001–02. After scoring 13 goals and 8 assists with Chelyabinsk that season, the Washington Capitals selected Semin in the first round, 13th overall, at the 2002 NHL Entry Draft (Washington's second overall pick, having drafted Steve Eminger 12th overall). Remaining in Russia for the subsequent season, he joined Lada Togliatti of the first-tier Russian Superleague (RSL) in 2002–03 and scored 10 goals and 7 assists in 47 games.

Semin made his NHL debut in the 2003–04 season, scoring 10 goals and 12 assists in 52 games. However, he missed his team's flight to Pittsburgh when the Capitals closed out their season against the Pittsburgh Penguins. Semin then reported to Maine to play for the American Hockey League (AHL)'s Portland Pirates, where he collected 15 points in 4 regular season and 7 playoff games.

Return to the NHL/Years in Washington 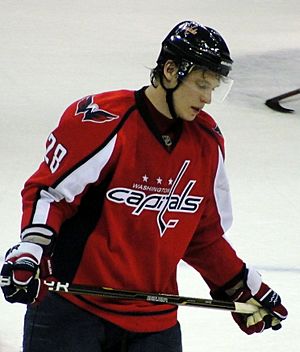 Semin with the Capitals in the 2011 playoffs

With Semin's military obligations fulfilled, he agreed to a two-year contract with the Capitals on 11 April 2006, resolving the conflict between the two parties. Playing in his first game for the Capitals in two years, Semin scored the team's first goal of the 2006–07 season against the New York Rangers on 5 October 2006. In his next game, against the Carolina Hurricanes, he recorded a hat-trick. On 18 March 2007, Semin tallied the second natural hat-trick of his career against the Tampa Bay Lightning, scoring three goals on three successive shots in a span of 7:04 in the second period. Late in the season, Capitals' head coach Glen Hanlon started Ovechkin and Semin together on the powerplay and occasionally on the team's first scoring line. Ovechkin and Semin finished as the team's top two scorers, and Semin soon became known as "The Other Alex". He completed the season with 38 goals (13th in NHL scoring) and 73 points in 77 games, missing five games to an injury early in the season. Semin was one of three 30-goal scorers for the Capitals for the season, along with Ovechkin and captain Chris Clark.

After a successful NHL comeback in 2006–07, Semin struggled in comparison during the 2007–08 season, scoring 42 points while being sidelined for 19 games. Along with Ovechkin and second-year forward Nicklas Bäckström, Semin helped form a highly offensive core with the Capitals in 2008–09. On 3 March 2009, Semin's 25th birthday, he scored his 100th career goal, against Carolina Hurricanes goaltender Cam Ward. Semin spent much of the first couple months of the season as the NHL's top point-scorer, but tailed off as he began to experience injury troubles. Regardless, he finished with a career-high 79 points in just 62 games, third in Capitals scoring behind Ovechkin and Bäckström. In the 2009 Stanley Cup playoffs, Semin added 14 points in 14 games, including a three-point effort (two goals and an assist) on 20 April 2009, leading the Capitals to a crucial playoff win against the New York Rangers in Game 3 of the opening round.

Midway through the 2009–10 season, Semin signed a one-year, $6 million contract extension with the Capitals.

Semin played for Russia in the 2010 Winter Olympics.

In Washington's 2010 quarter-final match-up against the Montreal Canadiens, Semin received large amounts of criticism due to his poor play, as he did not score any goals despite firing 44 shots on Canadiens goaltender Jaroslav Halák. He finished the series with just two assists in seven games as Montreal upset Washington 4–3 in the series, with the Capitals blowing a 3–1 series lead.

Semin signed another one-year extension with the Washington Capitals on 27 January 2011, worth $6.7 million. He became an unrestricted free agent on 1 July 2012.

On 5 April 2012, Semin became the fifth-highest all-time leading goal scorer of the Capitals with his 197th goal. 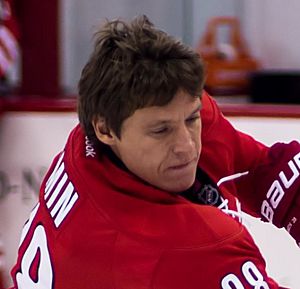 Semin with the Hurricanes in 2013

On 26 July 2012, the Carolina Hurricanes signed Semin to a one-year, $7 million contract.

On 25 September 2012, it was announced that for the time of 2012–13 NHL lockout, Semin would sign with Sokol Krasnoyarsk from Russian Major League, the Russian second-tier hockey division. He would wear jersey number 28 with the club. Despite the fact he had offers from top-level Kontinental Hockey League (KHL) clubs, he chose to play for a club from his hometown for free. However, after playing four games with Sokol, Semin signed a contract with Torpedo Nizhny Novgorod of the KHL. The president of Torpedo, Oleg Kondrashov, praised Semin for joining Sokol at first, saying, "The player's decision to pay tribute to the team that brought him up does credit to him," though he also added, "But a player of such high level should play in KHL."

Semin scored his 200th career goal on 11 February 2013, helping his team to a 6–4 victory over the New York Islanders. On 25 March 2013, the Hurricanes signed Semin to a five-year, $35 million contract extension.

On 30 June 2015, Semin was waived by the Hurricanes with the intent of him being bought out.

On 24 July 2015, Semin signed a one-year, $1.1 million contract with the Montreal Canadiens. He was then waived by the Canadiens in December. After going unclaimed, Semin refused to report to the AHL and sought a contract termination the following day.

On 28 May 2016, Semin agreed to a one-year contract extension with Metallurg Magnitogorsk. In July 2017, Semin enrolled in a metallurgy course at Siberian Federal University, but continued his career with Sokol Krasnoyarsk of the Supreme Hockey League, the second-highest Russian hockey league.

On 8 May 2018, Semin signed a one-year contract with HC Vityaz, marking his return to the KHL.

All content from Kiddle encyclopedia articles (including the article images and facts) can be freely used under Attribution-ShareAlike license, unless stated otherwise. Cite this article:
Alexander Semin Facts for Kids. Kiddle Encyclopedia.