Alexandr Yuryevich Zubkov (Russian: Александр Юрьевич Зубков; born 10 August 1974) is a Russian retired bobsledder who has competed since 1999. Competing in four Winter Olympics, he won two medals with a silver in 2006 (four-man) and a bronze in 2010 (two-man). On 24 November 2017, he was found guilty of doping offences and stripped of his medals from the 2014 Winter Olympics. 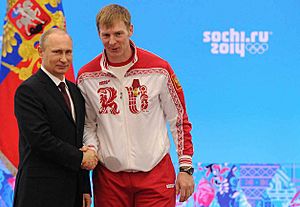 Zubkov with President Vladimir Putin at the award ceremonies for Russian athletes, 24 February 2014

Prior to competing in bobsleigh, he competed in luge. Zubkov finished 20th in the men's singles event at the 1998 Winter Olympics in Nagano.

In 2014 Sochi Winter Olympics, he was the flag bearer of Russia for the Opening Ceremony. Zubkov won Gold in both Two-Man and Four-Man Bobsleigh.

In the 2014 Sochi Olympics, Zubkov was coached by a former rival, Canadian Pierre Lueders. Zubkov also paid a fee to borrow personal skids from the 2011 World Champion, Germany's Manuel Machata. Machata bought the skids for €29,000 in Switzerland, and had not qualified for the 2014 Winter Olympics. The 2014 Olympics saw Germany failing to win a bobsleigh medal at an Olympics for the first time since Innsbruck 1964. Machata did not inform German Bobsleigh Luge and Skeleton Federation of this loan and received a one-year competitive ban and fine of €5,000 (250,000 rubles) from the Federation.

In October 2014 Zubkov announced his retirement from the sport due to a long-term injury which prevented him from competing at the start of the 2014–15 season.

In May 2016, Zubkov was named in a New York Times investigation of the state-sponsored steroid program in Russia. On 24 November 2017, he was found guilty of doping offenses and stripped of his medals from the 2014 Winter Olympics. In 2018 he appealed this decision in the Moscow City Court which has decided not to recognise the CAS decision in Russia. Therefore, in Russia he is still considered being an Olympics champion. This allows him to retain the lifetime Presidential stipend which is awarded to all Olympics medal winners.

On 1 February 2018, the CAS removed the sanctions from Alexey Negodaylo and Dmitry Trunenkov in bobsleigh, but upheld them on their teammates Alexandr Zubkov and Alexey Voyevoda.

His daughter, Elisaveta Zubkova, is a Russian skeleton slider.

All content from Kiddle encyclopedia articles (including the article images and facts) can be freely used under Attribution-ShareAlike license, unless stated otherwise. Cite this article:
Alexandr Zubkov Facts for Kids. Kiddle Encyclopedia.