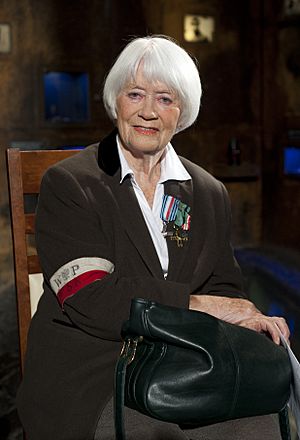 Alina Janowska (16 April 1923 – 13 November 2017) was a Polish actress. She was known for her roles in Zakazane piosenki and in Samson (by Andrzej Wajda). From 1970 to 1974, she starred in the comedy series Czterdziestolatek.

Janowska was born in 1923 in Warsaw, Poland. She came from a wealthy family. She was arrested on the night of 23 April 1942 for helping a Jewish family. She was imprisoned for 7 months in Pawiak in Warsaw. She was a member of the Warsaw Uprising.

In 1963, she married fencer Wojciech Zabłocki.

Janowska died on 13 November 2017 in Warsaw from Alzheimer's disease, aged 94.

All content from Kiddle encyclopedia articles (including the article images and facts) can be freely used under Attribution-ShareAlike license, unless stated otherwise. Cite this article:
Alina Janowska Facts for Kids. Kiddle Encyclopedia.