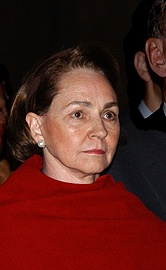 Aline Chrétien (née Chaîné; May 14, 1936 – September 12, 2020) was a Canadian socialite. She was the wife of Canada's 20th prime minister, Jean Chrétien. In her later life, she was a trained pianist with The Royal Conservatory of Music. He was born in Shawinigan, Quebec. Between 1993 to 2003, she was the Spouse of the Canadian Prime Minister.

All content from Kiddle encyclopedia articles (including the article images and facts) can be freely used under Attribution-ShareAlike license, unless stated otherwise. Cite this article:
Aline Chrétien Facts for Kids. Kiddle Encyclopedia.