All Saints Church, Alrewas is a parish church in the village of Alrewas, Staffordshire in the United Kingdom. The church is situated in the north west of the village on the north side of the Trent & Mersey Canal. The church is a Grade I Listed Building. A church has stood on the current site since the 10th century. The current building was mainly built during the 13th, 14th, 16th and 19th centuries. 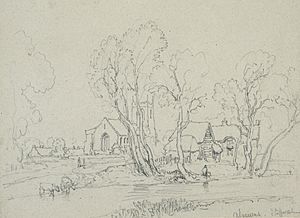 A church has stood on the current site since at least 822AD. The original building was believed to be made of timber with a roof of thatched reeds. Alrewas at the time was a flourishing settlement in the ownership of Ælfgar, Earl of Mercia and it remained the property of King John until he granted it to Roger de Somerville to be followed by the Griffiths and later, the Turtons.

The Normans replaced the simple wooden church with one of local stone which probably occupied the space in the present nave between the two arcades. The tower doorway, the north aisle door and the heavy rough hewn pieces of masonry in the north wall are the oldest remaining parts of the church dating from the original Norman building.

During the 13th century the fine Early English chancel was added to the church complete with lancet windows, and in the south wall a piscina, a sedilia and priest's door. The small window in the north wall had a bell hung by it which was rung at the Consecration of the Sacrament. The present nave and south aisle were built during the 14th century and the original Norman doorway in the north wall was retained. Other features of the 14th century include the 'horse shoe' arch separating nave from chancel and also the majestic tower, the old Norman west door being re-set at its base.

In the 16th century the church was added to with the insertion of clerestory windows which run the length of both nave and chancel. The beautiful carved timber roofs of the nave and south aisle were also constructed during this period.

In 1877 the chancel was restored, the Early English east window was changed and filled with new stained glass by Holiday. In 1891 the north aisle was built making the church symmetrical, the architect was Basil Champneys. The stained glass in the windows of the north aisle were by Charles Eamer Kempe. The chancel screen was erected in 1892. In 1866 the porch was rebuilt, above which is an old sundial and on the buttress to the right of the porch there is an ancient mass dial. 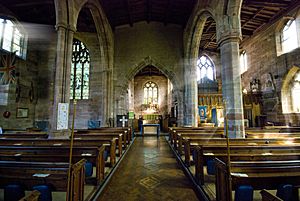 The Nave of All Saints

The church is still active in the village community today and holds Sunday services with an 8am Holy Communion and a 10am Family Service. There is also a bell ringing group associated with the church.

The church also gives its name to the All Saints Bowling Club situated between the church and the Trent & Mersey canal at the rear of the church. There is also All Saints Church of England Primary School, which is the main primary school in Alrewas.

All content from Kiddle encyclopedia articles (including the article images and facts) can be freely used under Attribution-ShareAlike license, unless stated otherwise. Cite this article:
All Saints Church, Alrewas Facts for Kids. Kiddle Encyclopedia.