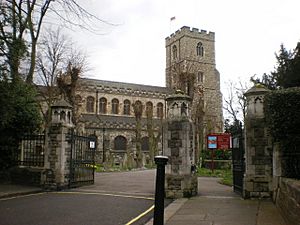 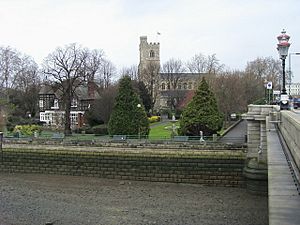 All Saints' Church is the ancient parish church of Fulham, in the County of Middlesex, pre-dating the Reformation. It is now an Anglican Church in Fulham, London, sited close to the river Thames, beside the northern approach to Putney Bridge. The church tower and interior nave and chancel are Grade II* listed.

There has been a church on the same site for more than 900 years. Denny writes that the first record of a church here dates from 1154 in the rolls of a tithe dispute. Apart from the tower, construction of which began in 1440, the present church building dates from the late Victorian period, having been rebuilt in 1880–1 by Sir Arthur Blomfield, using squared rubblestone, ashlar dressings and Perpendicular style windows. The church retains many memorials from the earlier church along with a plaque to the First World War dead of the 25th (County of London) Cyclist Battalion of the London Regiment, whose drill hall was at Fulham House from 1908 onwards.

Putney Bridge, and its predecessor Fulham Bridge, is unique in that it is the only bridge in Britain to have a church at both ends: the ancient St. Mary's Church, Putney is located in Putney, on the south bank, and All Saints' Church, Fulham, is on the north bank.

Due to the proximity of All Saints to Fulham Palace, the ancient residence of the Bishop of London, several Bishops of London were buried at All Saints.

The church was featured in the film The Omen, in a scene which begins in Bishop's Park, and ends with a bizarre accident where a priest (played by Patrick Troughton) is impaled by a lightning conductor on the top of the tower that is dislodged when it is hit by lightning.

In 2017, the Christmas Day service from the church was shown on BBC Television.

All content from Kiddle encyclopedia articles (including the article images and facts) can be freely used under Attribution-ShareAlike license, unless stated otherwise. Cite this article:
All Saints Church, Fulham Facts for Kids. Kiddle Encyclopedia.