All Saints is a parish church in Ulcombe, Kent. It was begun in the 12th century and is a Grade I listed building.

The church was begun in the 12th century, with alterations made during the next three centuries. Internal alterations were made in 1956–63 and the church was restored in the 1980s. The church is constructed variously of coursed and rubble stonework and plain tiled roofs to the nave and chancel. It is a Grade I listed building.

The nave is adjoined along its south side by an aisle and on the eastern end of the north side by a chapel. The chancel has chapels on the north and south sides. The 15th-century west tower is in three stages on a plinth with a battlemented parapet above a moulded string with gargoyles. A taller stair turret, also with battlements and gargoyles, is attached to the south-east corner. The belfry openings in the third stage are two-lighted with cinquefoiled heads. The second stage contains single light windows with trefoiled heads on the three outward facing sides. The west window above the west door is of three lights and traceried. Attached to the south side of the tower is a 19th-century or more recent rubble-built vestry with a lean-to roof. The vestry contains a repositioned medieval trefoil-headed window and a 19th-century doorway and window on the south side. 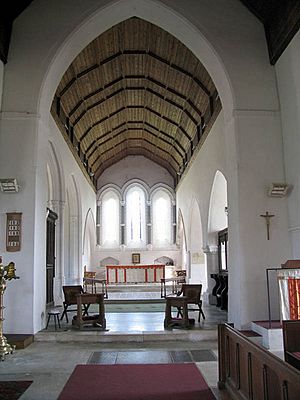 Internally, the nave is separated from the south aisle with a three-bay arcade of 13th-century pointed arches on rectangular piers. The arch to the north nave chapel is similar. The chancel is separated from its chapels with two-bay arcades on each side. The arcade to the south dates from the 13th century but includes a 12th-century column. The north arcade is contemporary with the north chapel. The chancel arch is 13th century on possibly 12th-century bases. The tower arch is 15th century and the arch between the south aisle and the south chapel is 15th century. The roof of the north chancel chapel is early 16th-century with moulded timbers. The other roofs are 19th-century and boarded. 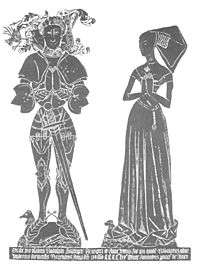 Monumental brass in Ulcombe Church, to Ralph I St Leger (d.1470) and his wife "Anne"

The south wall of the south chapel contains a 13th-century piscina. The east end of the chancel contains two aumbries. The western bays of the north and south arcades in the chancel contain carved screens. The northern one is late 15th or early 16th century with linenfold moulding to the lower part. The southern screen is 15th century with seven cinquefoiled headed lights and stalls below with three carved misericords. The walls feature wall paintings in various locations including St Michael defeating Satan, a number of crucifixions and Dives and Lazarus. The north window of the chancel contains grisaille glass and the east window of the north chapel (or "St Leger Chapel") contains stained glass in memory of the St Leger family, long lords of the manor of Ulcombe 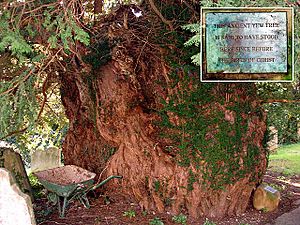 Yew tree in churchyard with plaque claiming it to be more than 2,000 years old

The churchyard contains a Grade II listed mid-18th-century table tomb. Also in the churchyard are several ancient Yew trees, one of which is claimed to be over 2,000 years old.

All content from Kiddle encyclopedia articles (including the article images and facts) can be freely used under Attribution-ShareAlike license, unless stated otherwise. Cite this article:
All Saints Church, Ulcombe Facts for Kids. Kiddle Encyclopedia.