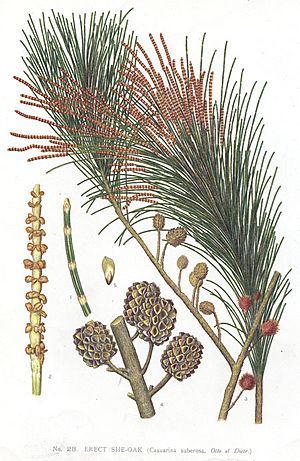 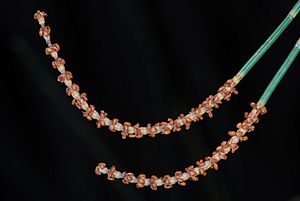 Allocasuarina is a genus of trees in the flowering plant family Casuarinaceae. They are endemic to Australia, occurring primarily in the south. Like the closely related genus Casuarina, they are commonly called sheoaks or she-oaks.

Wilson and Johnson distinguish the two very closely related genera, Casuarina and Allocasuarina on the basis of:

They are trees or shrubs that are notable for their long, segmented branchlets that function as leaves. Formally termed cladodes, these branchlets somewhat resemble pine needles, although sheoaks are flowering plants. The leaves are reduced to minute scales encircling each joint. Fallen cladodes form a dense, soft mat beneath sheoaks, preventing the development of undergrowth (a phenomenon known as allelopathy) and making sheoak woods remarkably quiet.

Another characteristic feature are the spiny "cones", about the size of an acorn but with a texture more resembling a conifer cone. However, sheoak "cones" are a woody fruit. Male specimens bear no fruit and are sometimes colloquially referred to as a "heoak".

As with legumes, sheoak roots possess nodules containing symbiotic nitrogen fixing bacteria; together with their highly drought-adapted foliage, this enables sheoaks to thrive in very poor soil and semi-arid areas. However, sheoaks are much less bushfire-tolerant than eucalypts.

Fossils of closely related species have been found dating back to the time of Gondwana.

The hard wood and rich texture makes sheoak wood popular among wood-turners. Sheoak wood is also regarded as an excellent firewood as it burns with very little ash.

Because of its ability to grow and develop extensive root systems in very poor or sandy soils, and to completely cover the ground with its "needles", it is often used to stabilise soils in erosion prone areas, or on sand dunes. Sheoak is also used as an ornamental shrub, although for this purpose the mat of "needles" may become a nuisance and must be carefully considered.

The status of the following species is unresolved:

All content from Kiddle encyclopedia articles (including the article images and facts) can be freely used under Attribution-ShareAlike license, unless stated otherwise. Cite this article:
Allocasuarina Facts for Kids. Kiddle Encyclopedia.