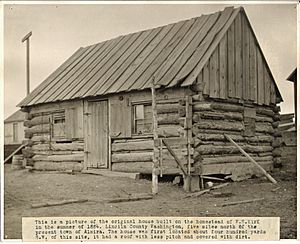 Almira is a town in Lincoln County, Washington, United States. The population was 284 at the 2010 census.

The area that would become Almira was first settled in the 1880s by Charles C. Davis purchased land and erected a small store to serve the few settlers living in the area. With the imminent construction of the Central Washington Railroad (later acquired by the Northern Pacific) through the area in 1889, Davis was approached by land developers Odgers and Reed who were looking to start a town on the site. The developers and Davis agreed to christen the new town Almira, after Davis' wife's given name. His farm had previously been called "Davisine".

With the railroad assured, Almira was platted and lots begin to sell quickly. Contractors and businessman began to build temporary buildings for their stores. The railroad reached Almira in the Fall of 1889, where it would serve as the line's temporary terminus before being extended to Coulee City the following summer. Until the road was completed to the Grand Coulee Almira remained the terminus. All trains ran to this point, connections by stage being made to points westward. These factors made the town furiously active but a harsh winter prevented any building boom from taking place, leaving Almira as a collection of temporary shacks until the weather improved.

Despite the end of Almira as a rail terminal, it continued to thrive through 1890 with the establishment of a newspaper and the construction of many new buildings. The town's population was 156. In November 1890, Almira citizens voted for prohibition and the city temporarily became the only dry town in the Big Bend Country. After the Panic of 1893, growth in Almira like all across the country, came to a standstill. Most of the undeveloped lots in town were either in foreclosure or completely worthless. This changed in 1900 when the economy began to improve following several years of prosperous wheat harvests.

The next several years saw Almira grow from a temporary village to a more substantial city. In 1902, the city's population was 289 only counting citizens living on the platted town site.

Almira was visited by fires twice in 1903. The first on March 21 destroyed several buildings including the office of the Almira News. The second fire in October started in the Almira Hotel and was much more destructive, destroying a whole block's worth of buildings. These blocks were rebuilt with more permanent brick buildings which still stand today.

Steps were taken towards incorporation in April 1903 but were initially unsuccessful because of disagreements in the town's incorporation boundaries. The second try was successful and Almira was officially incorporated on February 1, 1904. 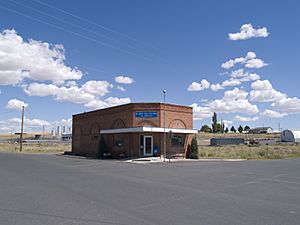 According to the United States Census Bureau, the town has a total area of 0.52 square miles (1.35 km2), all of it land.

There were 119 households, of which 24.4% had children under the age of 18 living with them, 56.3% were married couples living together, 8.4% had a female householder with no husband present, 5.9% had a male householder with no wife present, and 29.4% were non-families. 25.2% of all households were made up of individuals, and 18.4% had someone living alone who was 65 years of age or older. The average household size was 2.39 and the average family size was 2.83.

All content from Kiddle encyclopedia articles (including the article images and facts) can be freely used under Attribution-ShareAlike license, unless stated otherwise. Cite this article:
Almira, Washington Facts for Kids. Kiddle Encyclopedia.