Alpinacris tumidicauda is a species of grasshopper only known from Otago and Southland, New Zealand. The genus Alpinacris is endemic to the South Island of New Zealand. A. tumidicauda was described in 1967 by Robert Sidney Bigelow, with a type locality of Obelisk (Māori: Kopuwai) in the Old Man Range (45°19′22″S 169°12′27″E﻿ / ﻿45.3228°S 169.2074°E﻿ / -45.3228; 169.2074﻿ (Obelisk)). A male holotype and paratype are deposited in the Canterbury Museum, Christchurch. Like all of New Zealand sub-alpine and alpine grasshoppers, A. tumidicauda has a 2- or 3-year life cycle. The eggs must "overwinter" before they will hatch. Hoppers are found throughout the year, and adult grasshoppers can be found throughout the New Zealand summer between December and April. The adult A. tumidicauda do not overwinter. 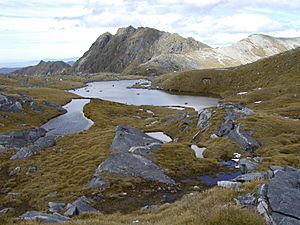 All content from Kiddle encyclopedia articles (including the article images and facts) can be freely used under Attribution-ShareAlike license, unless stated otherwise. Cite this article:
Alpinacris tumidicauda Facts for Kids. Kiddle Encyclopedia.