Altamont is a village located in the town of Guilderland in Albany County, New York. The village is in the western part of the town. The population was 1,720 at the 2010 census. The name means "high mountain."

In colonial times, this area was part of the Manor of Rensselaerwyck, granted by the Dutch West India Company to Killian Van Rensselaer in 1630. The area was known as Hellerburgh in the early 18th century. In the early 19th century Knowersville was established in the rural part of Albany county just below the Helderberg Mountains. This settlement eventually became known as Altamont.

Altamont was a summer vacation spot that was reached by train. The train station which once served this once busy whistle stop is now the location of the Altamont Free Library. The old hotel in the town center burned down nearly a century ago. A village fair has been held annually in the local fairgrounds since 1893. The fairground is also the site of other festivals.

According to the United States Census Bureau, the village has a total area of 1.2 square miles (3.1 km2), all of it land. However, there are two major streams that run through the town center, the Joriohenen and the Ostenraakie.[1] 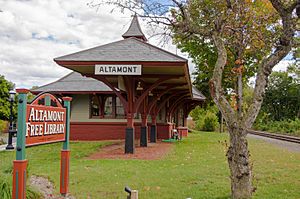 There were 646 households out of which 42.6% had children under the age of 18 living with them, 60.1% were married couples living together, 11.3% had a female householder with no husband present, and 26.5% were non-families. 22.0% of all households were made up of individuals and 11.6% had someone living alone who was 65 years of age or older. The average household size was 2.66 and the average family size was 3.14.

All content from Kiddle encyclopedia articles (including the article images and facts) can be freely used under Attribution-ShareAlike license, unless stated otherwise. Cite this article:
Altamont, New York Facts for Kids. Kiddle Encyclopedia.