Guilderland is a town in Albany County, New York, United States. In the 2010 census, the town had a population of 35,303. The town is named for the Gelderland province in the Netherlands. The town of Guilderland is on the central-northwest border of the county. It is west of Albany, the capital of New York. 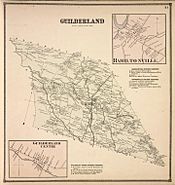 Guilderland was originally a part of the Manor of Rensselaerswyck begun by Patroon Kiliaen van Rensselaer in 1629 as part of the New Netherland colony. By the end of the 17th century Dutch settlers from Albany and Schenectady began to establish farms in the area, beginning first along the banks of the Normans Kill. In 1712 a group of emigrants from the Rhine Valley in present-day Germany passed through the town on their way to Schoharie. They were the first to record and name the Helderberg Escarpment, originally Hellebergh meaning "bright or clear mountain". This name would also be used for all the land between the Normans Kill and the escarpment. In 1734 the first known religious service was held by a Lutheran dominie from Athens, New York to the "Normanskill Folk", and the first religious structure was a Dutch Reformed Church in 1750.

Guilderland was from the beginning a location very amenable to early industry due to its numerous streams for waterwheels, large forests for wood fuel, and the fine sand for glass works. In 1795 Jan and Leonard de Neufville (father and son) established a large glass factory mostly for the manufacture of windows but also of bottles of various shapes, sizes, and uses. Around this factory would spring the hamlet of Hamilton (today called Guilderland). The factory could not compete with cheap British imports after the War of 1812 and with its collapse the glass industry would never return to Guilderland. A hat factory and a foundry would both occupy the site over the next 200 years. French's Mills, another hamlet founded on industry, would be home many textile mills thanks to the power harnessed from the falls on the Normans Kill near Guilderland Center.

During the US Revolutionary War many families in Guilderland were split in their loyalties. In New York, tenant farmers generally opposed their landlords, the Patroons, who sided with the rebellious independentists (Patriots), making New York one of the colonies were the war of Independence became a vicious civil war. The patroon of Rensselearswyck and the local clergy however were able to rally the support of the majority of the local settlers in opposing the Loyalists. Those remaining loyal to the established government operated among else from the caves of the Helderbergs raiding settlements with the help of Native American. A battle between Loyalists and rebel Schenectady Militia with help from Rhode Island Continental Troops was fought just east of Guilderland Center. It was later alleged that the local Loyalists were about to burn Schenectady and Albany, which is not entirely trustworthy as these would have been their own neighbors. In any case, the victory of the American forces allowed the Rhode Island contingent to travel to Saratoga for the Battle of Saratoga that occurred five weeks later, the turning point of the US Revolution.

From 1799 until its formation in 1803, Guilderland was a part of the town of Watervliet. The name Guilderland (spelled Guilderlandt in the original law) was the suggestion of resident Jeremiah Van Rensselaer, who happened to be Lieutenant-Governor of the state at the time, and as such was President of the Senate. His family (that of the original patroon) and many of the original settlers came from Gelderland, a province of the Netherlands. In 1871 the northwestern portion of Albany, west from Magazine Street, was annexed to Guilderland, after the town of Watervliet refused the annexation of the same territory. Portions of this territory would be annexed back to Albany in 1910, setting up more or less the current border.

At the start of the Town's founding, the Schoolcraft family was prominent. Congressman John L. Schoolcraft was born in Guilderland in September 1806. When his father, Captain John Schoolcraft, died in December of the same year, he was raised by his grandfather, John Schoolcraft. Wealthy grandfather Schoolcraft, owned much property in Guilderland hamlet, ran an inn and tavern, was the first Justice of the Peace in the hamlet, an elder and trustee of the Hamilton Union Church, and a member of the first Guilderland School Board. He was also the uncle of the famed Henry Rowe Schoolcraft. John L. Schoolcraft started a profitable mercantile business, became president of Albany Commercial Bank (later to become a component of today's Key Bank), and was groomed for politics by Thurlow Weed, editor of the Albany Evening Journal, winning his first Congressional election in 1848. In the 1840s, Schoolcraft built the early Gothic Schoolcraft mansion John Schoolcraft House upon his return from a European journey. He used it mostly as a summer residence. Schoolcraft was a close friend and confidant of Governor William Seward and married Seward’s niece, Carolyn Canfield, in 1853.

A number of sites in Guilderland are included on the U.S. National Register of Historic Places, including -

The town borders Schenectady County, New York, including the towns of Princetown and Rotterdam on the northern and western edges. It also borders the towns of Berne, Colonie and New Scotland and the city of Albany.

Two interstate highways, I-87 and I-90 run through Guilderland, meeting in the city of Albany, north of Crossgates Mall a large mall on the edge of Guilderland. US-20 also runs through the town.

There were 13,422 households out of which 31.6% had children under the age of 18 living with them, 54.2% were married couples living together, 8.5% had a female householder with no husband present and 34.7% were non-families. 28.5% of all households were made up of individuals and 8.6% had someone living alone who was 65 years of age or older. The average household size was 2.40 and the average family size was 3.00.

Communities and locations in Guilderland

The Altamont Free Library, located in and serving the Village of Altamont, is a free association library. The Village of Altmont is a political entity within the borders of the Town of Guilderland.

All content from Kiddle encyclopedia articles (including the article images and facts) can be freely used under Attribution-ShareAlike license, unless stated otherwise. Cite this article:
Guilderland, New York Facts for Kids. Kiddle Encyclopedia.