Colonie is a town in Albany County, New York, United States. It is the most populous suburb of Albany, New York, and is the third largest town in area in Albany County, occupying about 11% of the county. Several hamlets exist within the town. As of the 2010 census, the town had a total population of 81,591.

The name is derived from the Dutch Colonye or "Colonie", derived from the Colonie of Rensselaerswyck. All the land outside the Village of Beverwyck (now Albany) was referred to as the "Colonie". The town of Colonie is north of Albany and is at the northern border of the county. Within the town of Colonie are two villages, one also known as Colonie and the other known as Menands. 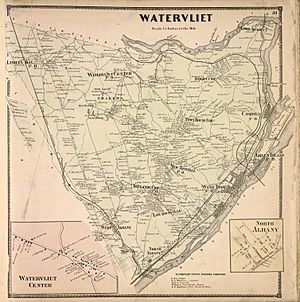 This area was once part of the Rensselaerwyck manor. The town of Colonie was formed in 1895 after the rural residents of the town of Watervliet opposed the state's proposal to transform the entire town into a city of Watervliet. The town/village of Green Island was also split off as a town from the town of Watervliet a year later and the village of West Troy that remained became the current city of Watervliet. All debts from the original town were divided proportionally between Green Island, Watervliet, and Colonie. Several lawsuits worked their way through the court system from the results of division. The original town of Watervliet was the "mother of towns" in Albany County, having once been all the land outside of the city of Albany within the county, all current towns either were formed directly or indirectly from a town formed from Watervliet. The central part of the town was once the location of the extensive Shaker community farms. The Watervliet Shaker Historic District is located in Colonie. Much of that land is now occupied by the Albany International Airport.

Through to the 1930s, Colonie was a simple series of extensive farms and a few hamlets. However, in the post-war years, there was intensive suburban development, originally on the corridor that connected Albany and Schenectady, but quickly throughout the entire township. By 1980, suburban development had saturated the community. At the same time, there were large highways (I-87, I-787, US Rt. 9 and NY Rt. 7) constructed which drastically changed the nature of the town and life there. The Colonie of the 1990s and beyond has become an entirely different community from the town of the 1930s and 1940s.

The Casparus F. Pruyn House at Newtonville is open to the public as the historical and cultural arts center for the Town of Colonie.

A number of sites in Colonie are included on the U.S. National Register of Historic Places, including -

There were 30,980 households out of which 29.2% had children under the age of 18 living with them, 53.3% were married couples living together, 9.6% had a female householder with no husband present, and 33.7% were non-families. 28.1% of all households were made up of individuals and 11.1% had someone living alone who was 65 years of age or older. The average household size was 2.43 and the average family size was 3.00.

The Town of Colonie operates and maintains over 850 acres of property and facilities, including the 130-acre Crossings Park, the 160-acre Mohawk River Park and Pool, the 12-acre Mohawk Riverside Landing Park, the 36-hole Town of Colonie Golf Course, the 43-acre Schuyler Flatts Cultural Park, a 5.5 mile section of the Mohawk Hudson Bike/Hike Trail, and other sports facilities and pocket parks.

All content from Kiddle encyclopedia articles (including the article images and facts) can be freely used under Attribution-ShareAlike license, unless stated otherwise. Cite this article:
Colonie, New York Facts for Kids. Kiddle Encyclopedia.