Watervliet ( WAW-tər-vleet or WAW-tər-və-leet) was a town that at its height encompassed most of present-day Albany County and most of the current town of Niskayuna in neighboring Schenectady County, in the state of New York, United States. Just prior to its dissolution, the town encompassed the current towns of Colonie and Green Island and the city of Watervliet. 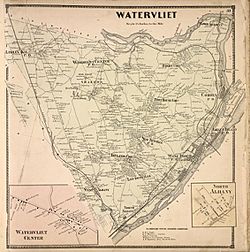 On March 7, 1788 the state of New York divided the entire state into towns, eliminating districts as administrative units by passing New York Laws of 1788, Chapters 63 and 64. This transformed the Western District of the Manor of Rensselaerswyck into the town of Watervliet. In the census of 1790, the town had a population of 7,419, which made it twice as populous as the city of Albany.

The European settlement of Watervliet predated the creation of the town by almost 200 years. Fort Nassau on Castle Island was built by Dutch colonists in 1614 within the original boundaries of the town. It passed to the town of Bethlehem upon its creation in 1793, later to be annexed to the city of Albany in the 20th century. Early settlers were Dutch farmers owning land north and south of Fort Orange along the Hudson River. The lands to the north came to be known as Watervliet, while the lands to the south were named Bethlehem.

The naming of Watervliet is probably derived from the town of Watervliet in Belgium, and was located in Holland during the period America was colonised. After Belgium became independent from the Dutch in 1830, Watervliet became Belgian territory; but borders Holland. 'Vliet' is the old naming for river estuaria.

The town had been settled by many immigrant groups who settled different regions of the town. In the western section of the town, in what would later become the town of Berne, Germans from the 1750s and Scots during the US Revolutionary War settled around the Helderberg Escarpment.

Over the next 20 years, several towns would be broken off from this town, often called the "Mother of Towns". Rensselaerville in 1790 would be the first town separated, Coeymans would separate in 1791, while Colonie would be incorporated as a municipality but would stay within Watervliet. Bethlehem would be created in 1793 from Watervliet. Colonie would become incorporated again, this time as a district in 1801. Guilderland would separate in 1803, and Colonie would become a village in 1804 and then a separate town in 1808. Niskayuna would separate in 1809, when Schenectady County was broken off from Albany County. In 1815 Colonie would be split between the city of Albany and the town of Watervliet.  In 1836 West Troy would incorporate as a village, Cohoes in 1848, and then Green Island in 1853 also as a village. Cohoes would be set off from the town as a city in 1869. In 1870 the portion of the former town of Colonie that Watervliet received in 1815 was annexed by the city of Albany. In 1870-71 the city of Albany west of Magazine Street (the so-called "Liberty" of Albany) was given by the state to the town of Watervliet. The town however was unwilling to accept the territory and subsequently ceded the territory to the neighboring town of Guilderland. At this same time the city of Albany annexed from Watervliet the hamlet of North Albany.

All content from Kiddle encyclopedia articles (including the article images and facts) can be freely used under Attribution-ShareAlike license, unless stated otherwise. Cite this article:
Watervliet (town), New York Facts for Kids. Kiddle Encyclopedia.