Watervliet ( WAW-tər-vleet or WAW-tər-və-leet) is a city in Albany County in the U.S. state of New York. The population was 10,254 as of the 2010 census. Watervliet is north of Albany, the capital of the state, and is bordered on the north, west, and south by the town of Colonie. The city is also known as "the Arsenal City".

The explorer Henry Hudson arrived in the area of Watervliet around 1609. The area was first settled in 1643 as part of the Rensselaerswyck patroonship, under the direction of Kiliaen van Rensselaer. In 1710, Derrick van der Heyden operated a ferry from the Bleeker Farm (near 16th Street) across the Hudson River to Troy. Troops during the Revolutionary War used this ferry in 1777 on their way to Bemis Heights and Stillwater for the Battle of Saratoga. In 1786, a second ferry was started at Ferry Street (today 14th Street) over to Troy. The town of Watervliet was founded in 1788 and included all of present-day Albany County except what was in the city of Albany at the time. Because so many towns had been created from the town of Watervliet, it is regarded as the "mother of towns" in the county. In 1816, as the first post office was erected, corner of River and Ferry streets (Broadway and 14th Street), it took the name Watervliet. 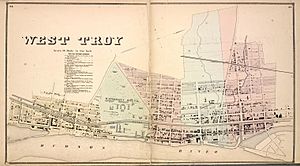 The location of the future city was taken by the village of Gibbonsville (1824) and its successor West Troy, and the hamlet of Washington (later Port Schuyler). The farm owned by John Bleeker, stretching north from Buffalo Street (Broadway and 15th Street) to the farm owned by the Oothout family near 25th Street was purchased by Philip Schuyler, Isais Warren, Richard P. Hart, Nathan Warren, and others in 1823; they named it West Troy. Gibbonsville was the farm of James Gibbons (which he purchased in 1805), which stretched from North Street (8th Street) to Buffalo Street (15th Street). Washington was settled sometime before 1814 and was the area south of Gibbonsville and today the area of Watervliet south of the Arsenal; it became known as Port Schuyler in 1827. Although Gibbonsville and West Troy sat side by side (West Troy lying on Gibbonsville's northern boundary), there was a rivalry between the two and each named and laid out their streets with no regard to the street names and grids of the other. In 1824 Gibbonsville became incorporated as a village, and in 1836 this was repealed when West Troy became incorporated as a village including Gibbonsville and Port Schuyler; and in 1847 the Watervliet post office changed its name to West Troy. In 1830, Gibbonsville had 559 people, West Troy 510, and Port Schuyler 450.

In 1865, present-day Watervliet was included in the Capital Police Force within the Troy District. This attempt at regional consolidation of municipal police failed and in 1870 the West Troy Police Force was organized.

In the early 19th century Watervliet became a major manufacturing community much like its neighbors Cohoes and Troy, thanks to bell foundries. The first was located on Water Street (Broadway), between 14th and 15th Streets, by Julius Hanks, and the first bell foundry in Gibbonsville was established in 1826 by Andrew Menelly, Sr. This would be the genesis of the Meneely Bell Foundry, which made thousands of bells that are still in use today from Iowa to the Czech Republic.

In 1813, the U.S. Federal Government purchased from James Gibbons 12 acres (49,000 m2) in Gibbonsville, in 1828 another 30 acres (120,000 m2), along with later purchases from S. S. Wandell and others. This land was used as the site for the Watervliet Arsenal, founded in 1813 during the War of 1812, it is the oldest Federal arsenal in the country; and is the sole manufacturing facility for large caliber cannon. John C. Heenan, U.S. heavyweight boxing champion and contender for the world title in 1860, was once employed at the Arsenal.

The main route of the Erie Canal from Buffalo to Albany ran through Watervliet, and because the canal bypassed the city of Troy, the business community of Troy decided that a "short cut" was needed for convenient access to the Erie Canal without having to go through the Albany Basin. A side-cut to the Hudson was located at Watervliet's present-day 23rd Street (the Upper Side cut) finished in 1823, and another just south of the Arsenal (the Lower Side cut). A weigh station and a center for paying canal boat operators was located here as well.

Also linking Watervliet to the transportation network of the region was the Watervliet Turnpike and the Albany and Northern Railway. The Watervliet Turnpike Company in 1828 built present-day New York State Route 32 from the northern boundary of Albany north to the northern limit of Gibbonsville (now Broadway and 15th Street). The Albany and Northern Railway was built in 1852 connecting Watervliet to Albany, with a depot on Genesee Street; a few years later a new depot was built on Canal Street (Central Avenue) but was abandoned in favor of returning to the original location in 1864.

There were 4,665 households out of which 26.9% had children under the age of 18 living with them, 32.9% were married couples living together, 16.5% had a female householder with no husband present, and 45.4% were non-families. 38.3% of all households were made up of individuals and 16.4% had someone living alone who was 65 years of age or older. The average household size was 2.18 and the average family size was 2.91.

All content from Kiddle encyclopedia articles (including the article images and facts) can be freely used under Attribution-ShareAlike license, unless stated otherwise. Cite this article:
Watervliet, New York Facts for Kids. Kiddle Encyclopedia.