The Helderberg Escarpment, also known as the Helderberg Mountains, is an escarpment and mountain range in eastern New York, United States, roughly 11 miles (18 km) west of the city of Albany. The escarpment rises steeply from the Hudson Valley below, with an elevation difference of approximately 700 feet (from 400 to 1,100 feet) over a horizontal distance of approximately 2,000 feet. Much of the escarpment is within John Boyd Thacher State Park, and has views of the Hudson Valley and the Albany area.

Cross-section of the Helderberg Ridge.

In 1934 the Schenectady Gazette described how the Tory Cave, one of the limestone caves to be found in the escarpment, routinely had stalagmites of ice in the springtime.

Most of the Capital District's television stations installed their transmission towers at the escarpment to take advantage of its high ground. In 2003 a 499-foot (152 m) tower was built on the highest point of the escarpment, for transmitting digital television signals.

Dutch settlers first homesteaded the plateau above the escarpment in the 17th century. Helderberg is a Dutch name meaning "clear mountain".

The Open Space Institute and the Mohawk Hudson Land Conservancy are working to keep escarpment lands from being developed for housing or industrial uses. Farmers farming land near the escarpment can apply to sell their development rights, to help make sure that land is not developed. In 2003 the Ten Eyck family, owners of the Indian Ladder Farm just below the escarpment, sold the development rights to their farm for $848,000. Two real estate assessment were done, one on the value of the property as a working farm, the other on its value as a potential site for urban development. The Ten Eycks were paid the difference in return for agreeing to keep the property as a working farm. They were the first property owners to sell their development rights in Albany County.

An edge of the Helderberg Escarpment, visible to the right 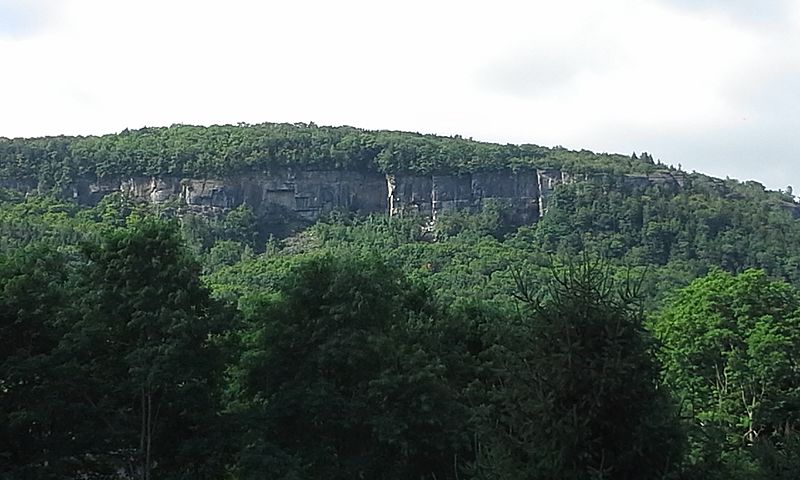 The Helderberg Escarpment, as seen from below

All content from Kiddle encyclopedia articles (including the article images and facts) can be freely used under Attribution-ShareAlike license, unless stated otherwise. Cite this article:
Helderberg Escarpment Facts for Kids. Kiddle Encyclopedia.