Alxasaurus (meaning "Alxa lizard") was a therizinosaur theropod that lived during the Lower Cretaceous, about 112 to 100 million years ago. Like its near relatives, it was herbivorous. It was about 13 ft (4 m) long and weighed about 800–900 pounds (350 to 400 kg). Five incomplete fossil skeletons have been found in Mongolia. 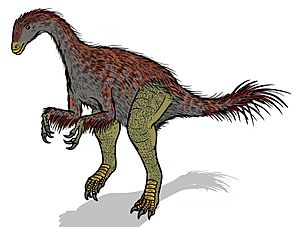 This dinosaur was first described and named by Canadian paleontologist Dale Russell and his Chinese colleague, Dong Zhiming, in a paper published in 1993. However, although the paper is technically included in the last issue of the 1993 volume of the Canadian Journal of Earth Sciences, this issue was actually released in the early weeks of 1994.

Alxasaurus is named after the Alxa Desert of Inner Mongolia, also known as the "Alashan" desert, and the name also includes the Greek word sauros ("lizard"). Alxa (or Alashan) is also the name of the league, or administrative division, of the Inner Mongolia (Nei Mongol Zizhiqu) region of the People's Republic of China.

The single known species (A. elesitaiensis) is named after Elesitai, a village found in this region, near which the fossil remains of Alxasaurus were located. 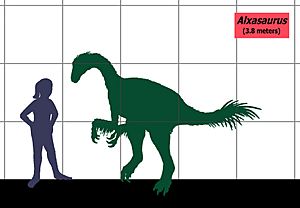 Five Alxasaurus skeletons were recovered from the Bayin-Gobi Formation of Inner Mongolia, which dates to the Albian stage of the Early Cretaceous Period, or about 112 to 100 million years ago. The holotype, specimen IVPP 88402a, which is considered to exemplify the genus and species, is the largest and most complete of the five, consisting of the mandible (lower jaw) and some teeth, as well as many limb bones, ribs, and vertebrae, including all five sacral (hip) vertebrae and the first nineteen tail vertebrae. There are four other specimens with which together the skeletons represent most of the bones in the body aside from the skull.

All content from Kiddle encyclopedia articles (including the article images and facts) can be freely used under Attribution-ShareAlike license, unless stated otherwise. Cite this article:
Alxasaurus Facts for Kids. Kiddle Encyclopedia.