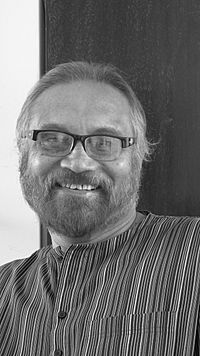 Aly Zaker (6 November 1944 – 27 November 2020) was a Bangladeshi actor, businessman, director and writer. He was the owner of Asiatic Marketing Communications Limited. He was born in Chittagong Division, Bengal Presidency, British India.

Zaker was a freedom fighter during the 1971 Bangladesh Liberation War.

He was known for starring in the movies Agami (1984) and Nodir Naam Modhumoti (1996). He also starred in the television series Bohubrihi and Aaj Robibar.

Zaker died at a Dhaka hospital on 27 November 2020 from COVID-19, three weeks after his 76th birthday.

All content from Kiddle encyclopedia articles (including the article images and facts) can be freely used under Attribution-ShareAlike license, unless stated otherwise. Cite this article:
Aly Zaker Facts for Kids. Kiddle Encyclopedia.