Alyeska Resort is a ski resort in Girdwood, Alaska, approximately 27 miles (44 km) from the city of Anchorage. Mount Alyeska is part of the Chugach mountain range and the Alyeska Resort is the largest ski area in the state. It includes the mountaintop Mt. Alyeska Roundhouse, which is listed on the National Register of Historic Places.

The Alyeska Ski Corporation was founded in 1954, and the first chairlift and day lodge were opened in 1959. The Roundhouse ski lodge and ski patrol station at the top of the mountain began construction in 1960. It is an octagonal building. Still standing, it was listed on the National Register of Historic Places as "Mt. Alyeska Roundhouse" in 2003, and now houses a museum to local ski history.

Currently, Alyeska has five chairlifts, one high-speed tram, and two Magic Carpets. Of the five chairlifts, one is co-owned by Alyeska and the Tanaka Foundation (Chair 5). Chairs 6 and 4 are high-speed detachable quads, while Chairs 7 and 3 are normal quads. Chair 4 was updated to a high speed quad in 2012. A sixth chairlift, Chair 1, was removed from service in the summer of 2017.

Chair 4 ends halfway up the mountain. The tram ends three-quarters of the way up the mountain. The interconnected buildings contain the Roundhouse (patrol quarters), and a much newer facility housing the upper tram terminal, a quick-service cafeteria, and the Seven Glaciers 4-star restaurant and bar. At the base of the tram is the modern 300-room Hotel Alyeska.

Chair 6 goes to the highest lift served point on the mountain at 2,750 feet (840 m). Several areas above Chair 6 are occasionally opened, but require hiking to access. Plans to build a new chair lift higher up the mountain have been announced.

Mount Alyeska is a fairly challenging mountain, and has a much higher percentage of advanced and expert runs, as compared to most other mountains in North America. It has a small section for the novice, but the rest of the mountain is almost entirely for the intermediate and the advanced skiers. 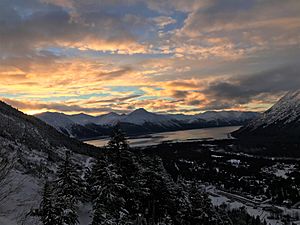 American Olympic gold medalist Tommy Moe (b. 1970) sharpened his racing skills at Alyeska as a teenager in the 1980s.

Alyeska was bought in December 2006 by John Byrne III, who says he plans to make many improvements to the resort, concentrating on people who come to ski for the day. Some of the improvements were installing RFID gates at all of the lifts, taking the bubbles off chair 6, because they were vandalized, repainting the tram, and building the only superpipe in Alaska. According to a statement issued October 9, 2018 by the resort's director of marketing, Eric Fullerton, Alyeska Resort has entered into a contract to sell "substantially all of its resort assets" to Pomeroy Lodging. 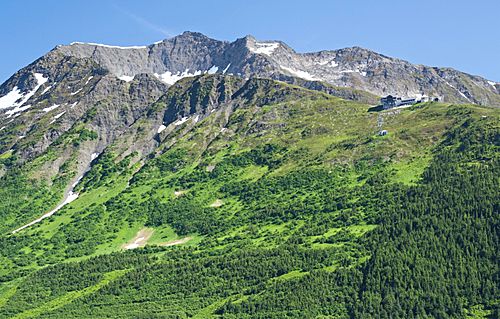 Alyeska has a subarctic climate (Köppen: Dfc), with short but mild summers and long, snowy winters. Snowfall is extremely heavy, owing to the Aleutian Low, with an average year getting 209 inches (530 cm) of snow. Precipitation in general is heavy, but is considerably less from late spring to mid- summer. A freeze has been recorded for every month of the year.

All content from Kiddle encyclopedia articles (including the article images and facts) can be freely used under Attribution-ShareAlike license, unless stated otherwise. Cite this article:
Alyeska Resort Facts for Kids. Kiddle Encyclopedia.