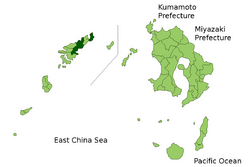 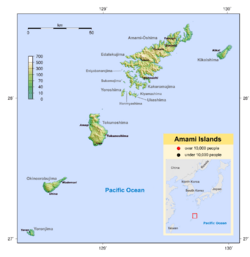 The name of the islands comes the mythological figure of Amamiko.

It was attacked by the Ryūkyū Kingdom in 1570, but was invaded by Satsuma Domain in 1609.

The native people of the Amami Islands are the Amami people, who are a subgroup of a larger Ryukyuan ethnicity.

The Amami language belongs to the Ryukyuan languages, all of which are endangered because in the past, Japan suppressed them. This is also why most younger Amamians speak Japanese instead, as it was enforced in schools.

The largest island in the group is Amami Island. Other islands include Kikai Island, Tokunoshima, Okinoerabu Island, Yorontou and some small islands make up the Amami Islands.

All content from Kiddle encyclopedia articles (including the article images and facts) can be freely used under Attribution-ShareAlike license, unless stated otherwise. Cite this article:
Amami Islands Facts for Kids. Kiddle Encyclopedia.