The island is mountainous, and Japan's most active volcano, Mt Aso at 1,591 metres (5,220 ft), is on Kyushu. There are many other signs of tectonic activity, including numerous areas of hot springs. The most famous of these are in Beppu, on the east shore, and around Mt. Aso, in central Kyushu.

The island is separated from Honshu by the Kanmon Straits. Kyushu is the nearest to the Asian continent which makes it the gateway to Japan.

Today's Kyushu Region is a politically defined region that consists of the seven prefectures on the island of Kyushu: 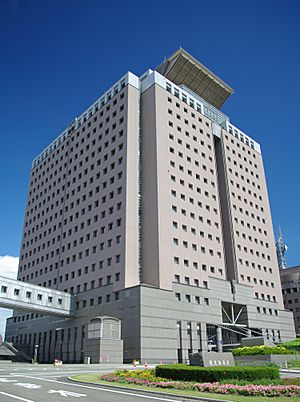 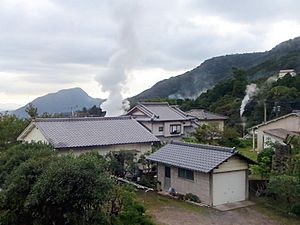 Parts of Kyushu have a subtropical climate, particularly Miyazaki prefecture and Kagoshima prefecture.

Major agricultural products are rice, tea, tobacco, sweet potatoes, and soy; silk is also widely produced. The island is noted for various types of porcelain. Heavy industry is concentrated in the north and includes chemicals, automobiles, semiconductors, and metal processing.

In 2010, the graduate employment rate in the region was the lowest nationwide, at 88.9%.

Besides the volcanic area of the south, there are significant mud hot springs in the northern part of the island, around Beppu. These springs are the site of occurrence of certain extremophile micro-organisms, that are capable of surviving in extremely hot environments. 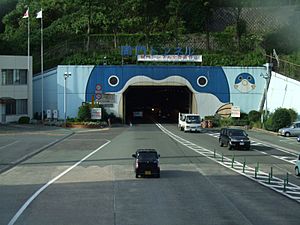 The island is linked to the larger island of Honshu by the Kanmon Tunnels, which carry both the San'yō Shinkansen and non-Shinkansen trains of the Kyushu Railway Company, as well as vehicular, pedestrian, and bicycle traffic.

The Kanmon Bridge also connects the island with Honshu. Railways on the island are operated by the Kyushu Railway Company, and Nishitetsu Railway.

All content from Kiddle encyclopedia articles (including the article images and facts) can be freely used under Attribution-ShareAlike license, unless stated otherwise. Cite this article:
Kyūshū Facts for Kids. Kiddle Encyclopedia.