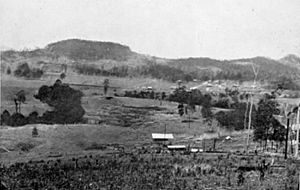 View of Amamoor township, circa 1931

Amamoor is a rural town in the Gympie Region of Queensland, Australia.

The town is named after a pastoral run held by J.D. McTaggart in the late 1850s. The origins of that name are believed to be derived from an indigenous language.

When the construction of a railway line between Brisbane and Gympie was being contemplated in 1884-5, one of the routes being considered was through the Mary Valley. However, this was not the route chosen, and the residents of the valley who were disappointed at missing out on rail connection agitated for many years until the Mary Valley branch line was built. The first section south from Monkland to Kandanga (via Amamoor) was completed in October 1914. The second stage to Booloo was completed in April 1915. The final stage to Kenilworth was to be built in 1920 but was never completed.

Amamoor Post Office opened around 1920 and Amamoor State School opened on 10 October 1921. It was relocated to its current location in Elizabeth Street in the 1950s.

In 1993, the services on the Mary Valley railway line were reduced, terminating at Melawondi, and the entire line was closed in 1994, ending Amamoor's rail connection.

Amamoor has heritage-listed sites, including:

Amamoor is 18 kilometres (11 mi) south of Gympie. The Bruce Highway passes to the east of the town and the Amamoor Forest Reserve is to the west.

Amamoor is situated on the Amamoor Creek which is a tributary of the Mary River. It is one of a chain of towns in the Mary Valley also including Imbil, Dagun, and Kandanga.

The Amamoor railway station is part of the Mary Valley Heritage Railway.

All content from Kiddle encyclopedia articles (including the article images and facts) can be freely used under Attribution-ShareAlike license, unless stated otherwise. Cite this article:
Amamoor, Queensland Facts for Kids. Kiddle Encyclopedia.