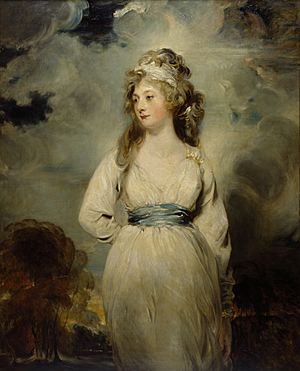 Amelia Anne Stewart, Marchioness of Londonderry, painted by Thomas Lawrence after her marriage in 1794

Amelia Anne Stewart, Marchioness of Londonderry (20 February 1772 – 12 February 1829), from 1794 until 1821 generally known as Emily Stewart, Lady Castlereagh was the wife of the Georgian era Irish statesman Robert Stewart, Viscount Castlereagh, who from 1812 to 1822 was British Foreign Secretary and Leader of the House of Commons. Well-connected by birth to the aristocracy and wife of a prominent politician who was Britain's leading diplomat during the close of the Napoleonic Wars, Lady Castlereagh was an influential member of Regency London's high society.

Her mother Caroline's father, William Conolly, was the nephew and heir of William Conolly, Speaker of the Irish House of Commons in the early 18th century and an extremely wealthy Irish landowner. Caroline's brother, Thomas Conolly, a noted Irish sportsman and Lady Castlereagh's uncle, was married to Louisa Lennox, daughter of Charles Lennox, 2nd Duke of Richmond, and one of the famous Lennox sisters. Caroline's mother, Anne Wentworth, was daughter of Thomas Wentworth, 1st Earl of Strafford.

They were a notably devoted couple but had no children. They did, however, care for the young Frederick Stewart while his father, Charles, Lord Castlereagh's half-brother, was serving in the army. Her devotion to her husband, combined with her love of foreign travel, well equipped Emily for the life of a diplomat's wife, and she was noted for her constant willingness to accompany her husband abroad, no matter how rigorous the journey.

After her husband's death Emily lived quietly in the country for almost two years. In 1824 she returned to her old social life, arousing the censure of some of her husband's friends who thought her conduct unfeeling. However her health soon failed and she died in 1829.

During the Regency of George IV, Lady Castlereagh, along with Lady Jersey, Dorothea Lieven, Lady Cowper, and others, was a Lady Patroness of Almack's, one of the first and most exclusive mixed-gender social clubs in London. In their role as Patroness, they had great influence over the ton, determining social acceptance by designating who might receive "vouchers" (entrance tickets) to Almack's, thereby setting and enforcing complex, unwritten social codes of the London social elite.

Credited with having introduced the quadrille to London, Lady Castlereagh is also remembered for having Almack's doors closed, without exception, at eleven o'clock, even once turning away the Duke of Wellington. Her own parties were considered dull, and her manner was somewhat eccentric: guests described her conversation as an endless flow of trivial information delivered in an oddly detached manner.

All content from Kiddle encyclopedia articles (including the article images and facts) can be freely used under Attribution-ShareAlike license, unless stated otherwise. Cite this article:
Amelia Stewart, Viscountess Castlereagh Facts for Kids. Kiddle Encyclopedia.