The plant is widely naturalised around the tropical Pacific and Indian Oceans, including Hawaiʻi, Indochina, Madagascar and Africa, possibly via anthropogenic introduction in these locales.

Solanum americanum is one of the most widespread and morphologically variable species belonging to the section Solanum. It can be confused with other black nightshade species in the Solanum nigrum complex.

Solanum americanum grows up to 1–1.5 metres (39–59 in) tall and is an annual or short-lived perennial. The leaves are alternate on the branch, and vary greatly in size, up to 10 centimetres (3.9 in) long and 7 centimetres (2.8 in) broad, with a 4-centimetre (1.6 in) petiole and a coarsely wavy or toothed margin. The flowers are about 1 cm diameter, white or occasionally light purple, with yellow stamens. The fruit is a shiny black berry 5–10 millimetres (0.20–0.39 in) diameter, containing numerous small seeds. 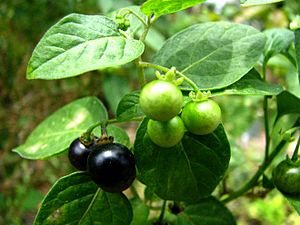 Research indicates the presence of toxic glycoalkaloids and there are warnings to be careful on the use of S.americanum as herbal medicine and food. The green fruit is particularly poisonous and eating unripe berries has caused the death of children. Ripe berries and foliage may also cause poisoning, though the toxicity seems to diminish somewhat with ripening. This is via high levels of the glycoalkaloids, solanine and solamargine. Other toxins present in the plant include chaconine, solasonine, solanigrine, gitogenin and traces of saponins, as well as the tropane alkaloids scopolamine (hyoscine), atropine and hyoscyamine.

Significant amounts of solasodine (0.65%) have been found in the green berries. The ripe fruit also contains 0.3–0.45% solasonine, and acetylcholine, and has a cholinesterase-inhibiting effect on human plasma. In Transkei, rural people have a high incidence of esophageal cancer thought to be a result of using S.americanum as a food. Livestock can also be poisoned by high nitrate levels in the leaves.

Toxicity varies widely depending on the genetic strain and the location conditions, like soil and rainfall. Poisonous plant experts advise: "...unless you are certain that the berries are from an edible strain, leave them alone."

All content from Kiddle encyclopedia articles (including the article images and facts) can be freely used under Attribution-ShareAlike license, unless stated otherwise. Cite this article:
American black nightshade Facts for Kids. Kiddle Encyclopedia.