Amir Abedzadeh (Persian: امیر عابدزاده, born 26 April 1993) is an Iranian footballer who plays for Portuguese club Marítimo and the Iran national team as a goalkeeper. He is the son of former Iranian national team legendary goalkeeper Ahmad Reza Abedzadeh.

Abedzadeh was a member of the Persepolis Youth Academy from 2006 to 2007, having previously trained under his father since he was 7. He moved to the United Kingdom at the age of 15, and after spending two months with the third-tier outfit of Brentford and taking part in a trial with Arsenal, he joined Tottenham Hotspur's academy team in 2009. Abezadeh left Tottenham in the same year, following their signing of Italian goalkeeper Mirko Ranieri.

During his time in the UK, Abedzadeh also played for amateur youth teams Dinamo Dorigo, London Tigers, and Persian FC, the latter of the G.E. Roberts Enfield Football Alliance League.

Abedzadeh was unable to obtain a work permit in UK and after briefly returning to Iran and training with Iran Pro League side Steel Azin, where his father was a coach, to keep himself on form, he moved to the United States in 2011, and signed for the Los Angeles Blues in the USL Pro, where his father was an assistant coach. He made his debut on 7 June 2011, playing for Los Angeles Blues 23 (LA Blues' reserve team) in a USL Premier Development League game against Orange County Blue Star. He made 8 saves but conceded 5 goals, and was also shown a yellow card. In 2012, he had the option to join Chivas USA of Major League Soccer, but he decided to extend his contract with the Blues.

On 3 July 2014, Abedzadeh joined Rah Ahan with signing a four-year contract. He worked under the supervision of his father, Ahmad Reza Abedzadeh who also worked at Rah Ahan as goalkeeping coach. He played his first professional match on 19 September 2014 against his former team Persepolis, where he came in as a substitute of injured Igor Nenezić in 34th minute. He was released by Rah Ahan at the end of the 2014–2015 season.

Abedzadeh signed with Portuguese Primeira Liga club Marítimo on 23 January 2017 after good performances with Barreirense in the Campeonato de Portugal. He became the second Iranian goalkeeper to sign for the club after Alireza Haghighi who played for the club in 2016. He made his first appearance in September 2017 in a Portuguese League Cup match.

He made his debut in the Taça de Portugal on 14 October 2017 in a third round match against Torcatense. Abedzadeh kept a clean sheet and was named man of the match, as Marítimo won the match 1–0. 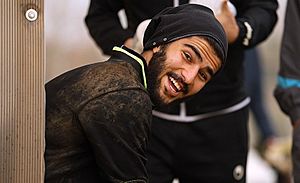 Abedzadeh in training with Iran Olympic team in 2014

Abedzadeh was once called up to Iran national under-17 football team's camp for 2009 FIFA U-17 World Cup in Kish Island, but never invited again.

About his playing probability in Iran national under-23 football team, Abedzadeh said: "Again, they told me that they wanted to take the players who have been together for a long time and know each other well... They also explained that if we should qualify, they are going to call in and examine new players . So hopefully they can beat Iraq and qualify for the Olympics, and hopefully I'll get my chance then. I think the problem is that I was in England for the past four years and that they weren't able to watch me play as much as the local players. That has been pretty disappointing for me."

Abedzadeh was part of Iran's team for in 2014 AFC U-22 Championship, but he did not play any match. In 2015, he was invited to Olympic team for 2016 AFC U-23 Championship qualification. 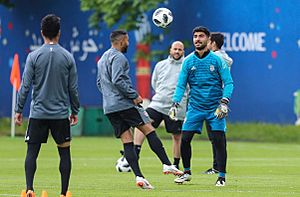 Abedzadeh in training with Iran.

On 5 November 2017, Abedzadeh was called into the Iran national team for the first time for friendlies against Panama and Venezuela. In June 2018, he was named in Iran's final squad for the 2018 FIFA World Cup in Russia. He made his debut against Uzbekistan on 19 May 2018.

All content from Kiddle encyclopedia articles (including the article images and facts) can be freely used under Attribution-ShareAlike license, unless stated otherwise. Cite this article:
Amir Abedzadeh Facts for Kids. Kiddle Encyclopedia.