Amorpha fruticosa is a species of flowering plant in the legume family Fabaceae, known by several common names, including desert false indigo, false indigo-bush, and bastard indigobush. It is native to North America.

It grows as a glandular, thornless shrub which can reach 5 or 6 m (16 or 20 ft) in height and spread to twice that in width. It is somewhat variable in morphology. The leaves are made up of many hairy, oval-shaped, spine-tipped leaflets. The inflorescence is a spike-shaped raceme of many flowers, each with a single purple petal and ten protruding stamens with yellow anthers. The fruit is a legume pod containing one or two seeds.

It is found wild in most of the contiguous United States, southeastern Canada, and northern Mexico, but it is probably naturalized in the northeastern and northwestern portion of its current range. The species is also present as an introduced species in Europe, Asia, and other continents. It is often cultivated as an ornamental plant, and some wild populations may be descended from garden escapes. 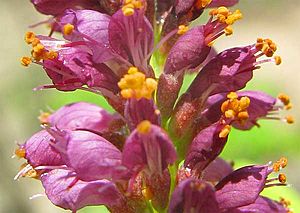 6'-O-β-D-glucopyranosyl-12a-hydroxydalpanol, a rotenoid, can be found in the fruits of A. fruticosa. Several members of the amorfrutin class of compounds have been isolated from the fruits. Amorfrutins as well as other secondary metabolites from A. fruticosa have displayed favorable bioactivities counteracting diabetes and the metabolic syndrome.

All content from Kiddle encyclopedia articles (including the article images and facts) can be freely used under Attribution-ShareAlike license, unless stated otherwise. Cite this article:
Amorpha fruticosa Facts for Kids. Kiddle Encyclopedia.