Ampleforth Abbey is a monastery of Benedictine Monks a mile to the east of Ampleforth, North Yorkshire, England, part of the English Benedictine Congregation. It claims descent from the pre-Reformation community at Westminster Abbey through the last surviving monk from Westminster Sigebert Buckley (c. 1520 - c. 1610). As of 2020, the monastery has 53 monks. 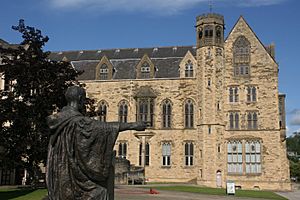 The Abbey was founded in a house given to Father Anselm Bolton by Lady Anne Fairfax, daughter of Charles Gregory Fairfax, 9th Viscount Fairfax of Emley. This house was taken over by Dr. Brewer, President of the Congregation, 30 July 1802. The community, since leaving Dieulouard in Lorraine, where its members had joined with Spanish and Cassinese Benedictines to form the monastery of St Laurence, had been successively at Acton Burnell, Tranmere, Scholes, Vernon Hall, and Parbold Hall, under its superior Dr. Marsh.

On its migration to Ampleforth Lodge, Dr. Marsh remained at Parbold and Father Appleton was elected the first prior of the new monastery. Shortly afterwards Parbold was broken up and the boys of the school there transferred to Ampleforth. The priory was erected into an abbey, in 1890, by the Bull "Diuquidem", and an important and flourishing college was founded. John Cuthbert Hedley, Bishop of Newport, was an alumnus, as well a superior of Ampleforth, Abbot Smith. The monastery was finished in 1897. The first abbey church was begun in 1857 and torn down in 1957. The existing Abbey church was begun in 1924, consecrated in 1961, and was designed by notable architect Giles Gilbert Scott, replacing the mid-19th century church of Charles Hansom.

Blazon: Per fesse dancetté Or and Azure a chief per pale Gules and of the second charged on the dexter with two keys in saltire Or and Argent and on the sinister with a Cross Flory between five martlets of the first. (College of Arms, London 1922). Ensigned with an abbot's crosier in pale behind the shield Or garnished with a pallium crossing the staff argent and a galero with cords and twelve tassels disposed on either side of the shield in three rows of one, two, and three all Sable.

The monastery founded a school at Ampleforth in 1802. It is now the co-educational independent boarding school Ampleforth College, with about 600 students. Since 2017 the college has separated from the Abbey by splitting the site and each having their own independent governance. Monks from Ampleforth Abbey continue to oversee the spirituality program of the College.

In addition to the work at Ampleforth, some of the monks are assigned as parish priests to parishes across four dioceses.

Ampleforth has a Permanent Private Hall at St Benet's Hall, Oxford, which was founded in 1897 for the purpose of letting monks study for secular degrees. It now accepts lay undergraduates and graduates, as well as monastic members.

Ampleforth founded a daughter house, the priory at St. Louis, Missouri in 1955. The priory gained independence in 1973 and became Saint Louis Abbey in its own right in 1989.

In 1996, Ampleforth set up the community of Christ the Word in Zimbabwe which had three members as of 2020.

All content from Kiddle encyclopedia articles (including the article images and facts) can be freely used under Attribution-ShareAlike license, unless stated otherwise. Cite this article:
Ampleforth Abbey Facts for Kids. Kiddle Encyclopedia.