Amsinckia lycopsoides is a bristly annual herb similar in appearance to other fiddlenecks. Its coiled inflorescence contains yellow flowers about a centimeter long and nearly the same in width, with a five-lobed corolla closed at the mouth by the bulges in the lobes. 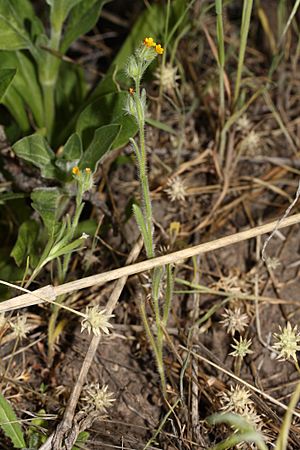 It is an introduced species or native far beyond the Pacific region, to Alaska, Texas, and New England. In Australia, the species has become a widespread weed of pasture lands.

All content from Kiddle encyclopedia articles (including the article images and facts) can be freely used under Attribution-ShareAlike license, unless stated otherwise. Cite this article:
Amsinckia lycopsoides Facts for Kids. Kiddle Encyclopedia.