Amsinckia menziesii is a species of plant in the family Boraginaceae, the borage or forget-me-not family.

The plant has two varieties: 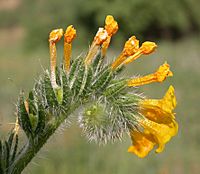 A. menziesii var. intermedia, showing the "fiddleneck", which is a cincinnus inflorescence

Amsinckia menziesii var. intermedia (common fiddleneck, or intermediate fiddleneck) is one of the common fiddlenecks of western North America, distributed from Alaska and Canada through the Western United States to Mexico. Like other members of the genus, it has a terminal flowering whorl somewhat shaped like the head of a violin or fiddle, hence the name fiddleneck. The flowers are yellow-orange, orange, or dark yellow.

In Australia, the species has become a common weed of cultivated areas in New South Wales, Victoria and Queensland. In the British Isles, it is an introduced species naturalised particularly in the east of the country and recorded in the wild since 1910.

Its seeds, while inedible to humans due to their high pyrrolizidine alkaloid content, are the favorite food of Lawrence's goldfinch during that Californian bird's nesting season of spring and early summer.

All content from Kiddle encyclopedia articles (including the article images and facts) can be freely used under Attribution-ShareAlike license, unless stated otherwise. Cite this article:
Amsinckia menziesii Facts for Kids. Kiddle Encyclopedia.